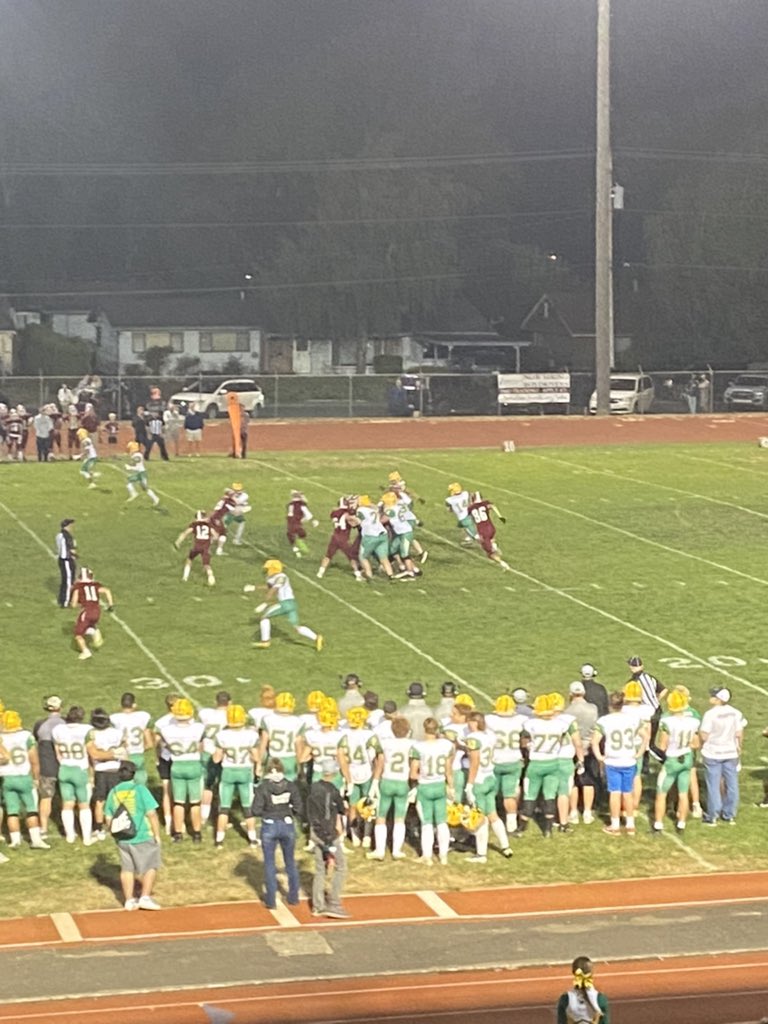 (Chehalis, WA) A big early season 2A showdown took place at Bearcat Stadium for week 2 of the high school football season. The reigning 2A state champions, the Lynden Lions (1-0), made a rare trip to an Evergreen Conference opponent as they took on the W.F. West Bearcats (1-0) for the first time since a semifinal meeting between the two teams in 2011. Like that semifinal, it would be the Lions walking away with the victory and it was their defense that stole the show.

The showdown between two consensus top 10 teams in the 2A classification had the big game feel before the game ever started and that carried over after the ball was kicked off. Both defenses would flex their muscle right out of the gate. The Bearcats forced a three and out on the Lions first possession, but the Bearcats wouldn’t fare much better as they also had to punt after three offensive plays.

Lynden then figured out what was going to work and that was running the football. The combination of seniors Lane Heeringa and Campbell Nolte proved to be difficult to stop as Lynden marched down the field on their second possession while killing a lot of the clock. With the ball at the seven-yard line, quarterback Kaedan Hermanutz would keep the ball on a read option and waltzed his way into the endzone to give Lynden the 7-0 lead.

W.F. West would answer with a nice long drive, but the height advantage of the Lynden secondary paid dividends with an interception to kill the Bearcats momentum. The Lions then marched down the field once again and Lane Heeringa would power into the endzone for a five-yard touchdown. With the missed extra point, it was 13-0 Lynden with under two minutes remaining in the half.

It would be enough time for the Bearcats as senior quarterback Gavin Fugate led the offense on another methodical drive down the field. This time, the Bearcats finished it off with points as Fugate would keep it for a 10-yard score to get W.F. West on the board at 13-7 with just 40 seconds remaining in the half. 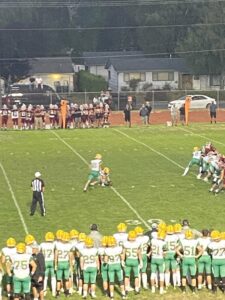 Shockingly, it would be enough for Lynden to counter. A nice kick return was improved on a penalty and Lynden had the ball in Bearcat territory. With time for one more play before halftime, Lynden coach Blake VanDalen sent his kicker on the field to try a 40-yard field goal. Troy Petz wowed everyone as he nailed the kick to give Lynden a two-possession lead going to the half with the score 16-7.

Halftime talks can completely change how a team is performing. One thing can stick with a group of players that can make all the difference and get everyone on the same page. Something was said in the Lynden locker room at halftime and the defense responded. The Lions would force a quick three and out from the Bearcats to begin the 3rd quarter after a sack by Lane Heeringa. Backup quarterback Brant Heppner would handle the next offensive drive for the Lions and he would march Lynden right down the field and punch it in himself for a three-yard touchdown and a two-point conversion to make the score 24-7 Lynden.

Another Heeringa sack backed the Bearcats up deep in their own territory. A bad snap had Fugate trying to pounce on the ball for a safety, but a collision with a Lynden defender knocked the ball around. It would be none other than Lane Heeringa to pounce on the ball in the endzone for another Lion touchdown. Lynden was in total control 31-7.

The defense would dominate the rest of the way with another sack for Heeringa and two more interceptions. A safety on a bad snap on a Bearcat punt attempt gave Lynden their final points. When the clock hit all zeros, it would be Lynden headed home with a 33-7 victory. 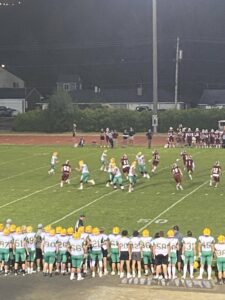 For the Bearcats, it was Gavin Fugate leading the offense. The senior quarterback went 9-18 through the air for 138 yards and 13 carries for yards and a touchdown. Evan Stadjuhar had three catches for 97 yards for the Bearcats and Tucker Land had five carries for 27 yards.

Our Thorbeckes MVP was Lane Heeringa of the Lynden Lions. The senior had 16 carries for 67 yards and a touchdown on offense. It was his defense that separated him from the pride as he had three sacks and a fumble recovery for a touchdown to lead the Lions to the victory.

Lynden moves to 2-0 and will look to carry that momentum into their league opener next week. The Lions will open Northwest Conference play against a 2021 2A semifinalist in the Squalicum Storm (1-1). W.F. West drops to 1-1 and will also begin league play next week. The Bearcats will host Evergreen Conference foe Shelton (2-0) on Friday.

The Bearcats get on the board

Lynden defense sets the tone in the 2nd half