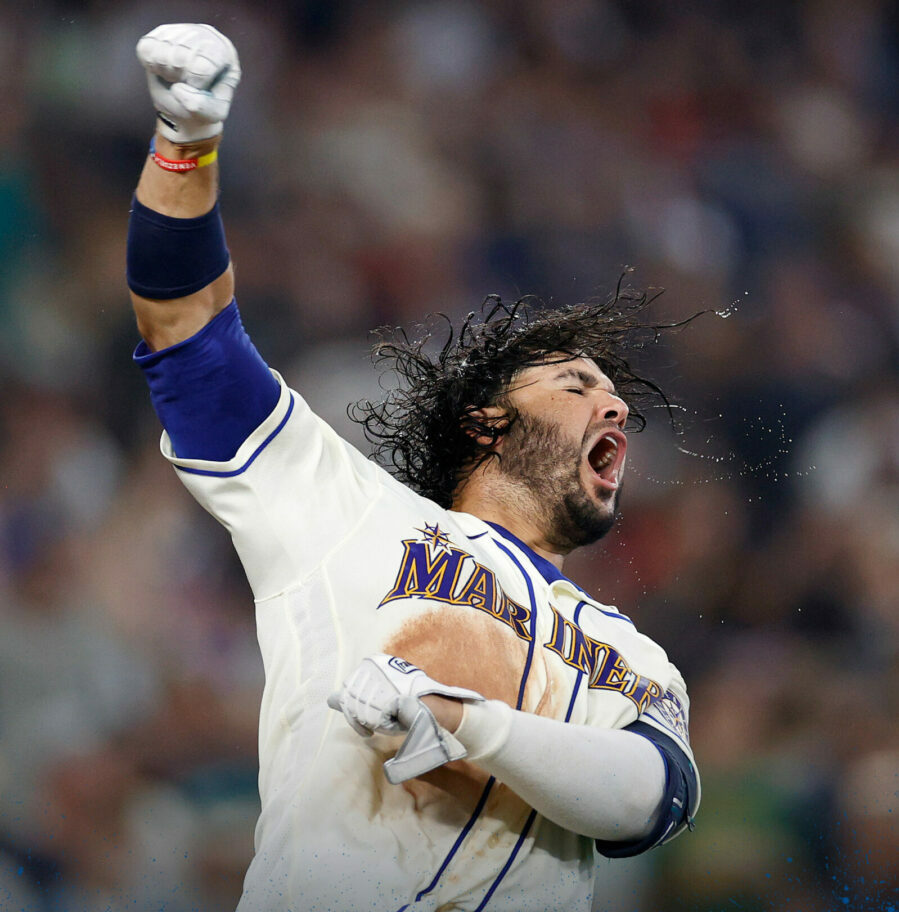 (Seattle, WA) It was once again a playoff feeling on Sunday in Seattle as the Mariners hosted the Atlanta Braves in the rubber game of the three-game series. With the Seahawks opener on Monday, everyone was packed into T-Mobile Park. The atmosphere only grew more and more like a playoff game as the M’s offense rocked Atlanta starter Jake Odorizzi. However, after a wild 9th inning, it would be the Mariners needing a walk-off to send everyone home happy.

Seattle would land the first blow against Odorizzi. Julio Rodriguez would leadoff the bottom of the 1st and he would set the tone immediately. The rookie would drive a fastball the other way to right center and it would carry out for J-Rod’s 24th home run of the season. Seattle was quickly ahead 1-0.

Marco Gonzales came out in another big game and got off to a hot start. A double play helped him erase a first inning error, and he would build off of that and would sit down the first 11 Braves hitters. Then he would make his one mistake in the top of the 4th. National League MVP candidate Austin Riley would get ahead 3-0 and crushed a cutter for his 36th home run of the season. One mistake by Marco made the game 1-1.

It would be the offense picking up the pitching in this one. In the bottom of the 4th, a counter by Seattle chased Jake Odorizzi. Back-to-back walks by Cal Raleigh and Carlos Santana started off the inning. Adam Frazier then laced one to the gap for extra bases. Raleigh and Santana would both score as Frazier dove into third with a two-run triple to make it 3-1 Mariners. After a couple pop ups, Sam Haggerty came through with two outs driving in Frazier with an RBI single to make it 4-1.

The bottom of the 5th would see the Mariner power surge once again. The team leader in home runs, Eugenio Suarez, made it 5-1 Mariners with a solo home run. It would be Geno’s 29th home run in his first season as a Mariner.

Marco Gonzales would see his outing come to an end after the top of the 6th. The veteran lefty would give the M’s six strong innings only allowing two hits and one run with no walks and five strikeouts. It was Marco’s fourth straight quality outing.

Extra insurance would be on the way in the home half of the 6th. A leadoff walk by Adam Frazier would have him on first with one out when J.P. Crawford came to the plate. The Mariner shortstop would then hit a double to center to drive in Frazier from first for an RBI double. Crawford’s 23rd double of the season made it 6-1 Seattle.

Erik Swanson would be on to pitch the 8th for the Mariners but it was an outing he would like to forget. Michael Harris II would hit a solo shot to right for his 17th home run of the season. With the score now 6-2, Swanson would walk Marcell Ozuna on four pitches and then get Robbie Grossman to fly out to center for the first out. Andres Muñoz would come in for Swanson and would put out the fire by getting Ronald Acuña Jr. to fly out to right and Dansby Swanson to groundout to short to end the inning with the 6-2 Seattle lead still intact.

The top of the 9th would be much worse for the Mariners. Diego Castillo would come in to try to finish off a massive series win for Seattle but ran into a lot of trouble. A four pitch walk to Austin Riley started the inning and Matt Olson would follow that with another walk to put runners on first and second with nobody out. William Contreras would move the runners over with a groundout for the first out. Vaughn Grissom then struck out to put the Braves down to their last out.

Trouble then reared its ugly head as Michael Harris II hit his second home run of the game with a three-run shot to right to make it 6-5. Paul Sewald then came into the game to try to slam the door. Eddie Rosario singled to right to bring up Robbie Grossman. What looked to be a magical weekend turned into a nightmare when Grossman hit his sixth home run of the season with a two-run shot to right. The Mariners had a 6-2 lead and were one out away from a win and now found themselves in a 7-6 hole.

Kenley Jansen came on to pitch for the Braves against Sam Haggerty to start the bottom of the 9th. Haggerty tried to reach on a bunt but was retired by Austin Riley at third for the first out. Julio Rodriguez gave nobody on opportunity to retire him. J-Rod hit a missile off the scoreboard in left for his first career multi-home run game. Julio’s 25th home run of the season tied the game at 7-7. Two batters later, the Mariners had another multi-homer game. Eugenio Suarez launched his second home run of the game to left center for his 30th bomb of the season. Geno’s second walk-off home run of the season earned the Mariners the 8-7 win and a series victory over the defending World Series champions.

Seattle (79-61) took advantage of losses by Tampa Bay, Toronto, and Baltimore and are now tied with the Rays for the top Wild Card in the American League. They are half of a game ahead of Toronto and now six games ahead of the Baltimore Orioles. The Mariners will be off on Monday before opening a two-game series in Seattle against the San Diego Padres (77-64) who are fighting for a National League Wild Card. Logan Gilbert (12-5, 3.23 ERA) looks to continue his hot stretch after not allowing a run in his last two starts. The Padres will counter with former division foe of the Mariners in Yu Darvish (13-7, 3.31 ERA) as San Diego looks to get some payback on Seattle after the Mariners swept a two-game series in San Diego back in July.

I was not in a good place for a while on Sunday. My Green Bay Packers were losing to the Minnesota Vikings and the Mariners had just blown a four-run lead with two outs in the 9th. But then a rarity happened and that was the offense picked up the dominant Mariners bullpen. Listening to the guys lift up Sewald and company was really awesome, and it was true. The pitching has been so good this year that the offense can pick them up every now and then. They did it in Cleveland after the rain delay and now they did it against the reigning champions. The emotion from the team after the Suarez walk-off was special and sends a message to the rest of the MLB. After taking the series from Atlanta, who is one of the favorites to win the World Series this year, this team is ready. You want a dark horse candidate to win it all? That dark horse resides in the Pacific Northwest.