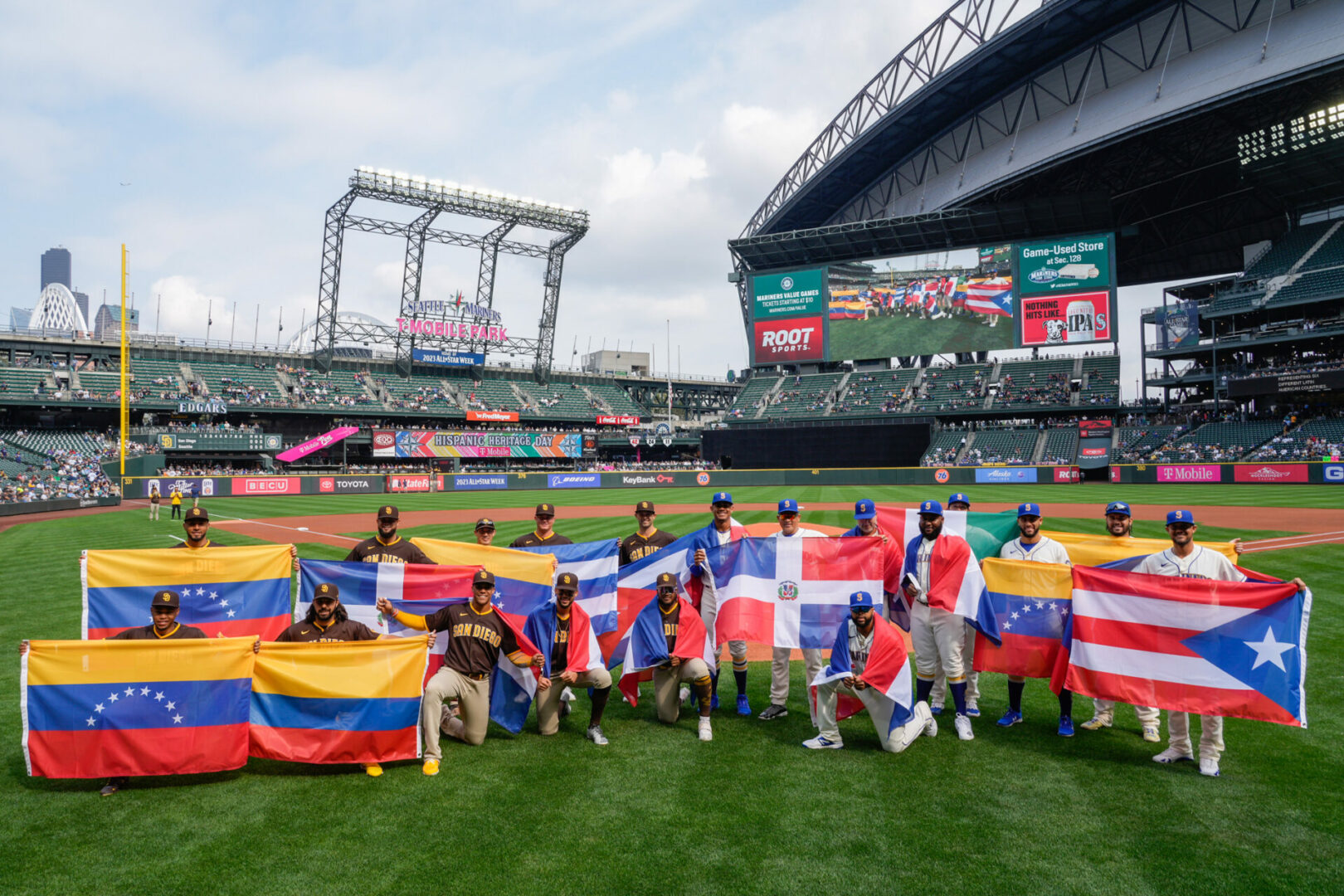 (Seattle, WA) It was a Wednesday day game for the Seattle Mariners as they celebrated Hispanic Heritage Day at T-Mobile Park by wearing their Sunday alternate uniforms with “Marineros” stitched on the uniforms. The team would also celebrate with three home runs by Hispanic players and a dominant performance by a Hispanic pitcher as the Mariners ended the homestand with a 6-1 win over the San Diego Padres.

The game had a special feeling immediately. Luis Castillo sat the Padres down in order in the top of the 1st with strikeouts of Juan Soto and Manny Machado. Castillo would throw is fastest pitch of the season to Machado with a 100-mph fastball. Right then and there everyone knew Castillo had his A+ stuff going.

That feeling would grow on the first pitch from Padres starter Mike Clevinger. Julio Rodriguez would jump all over the first pitch and launched a solo shot to left field to give the Mariners an immediate 1-0 lead. Seattle wasn’t done in the 1st either. Ty France would follow J-Rod with a seeing-eye single to right. That would set up Eugenio Suarez and he stayed red hot. Geno would get a fastball up in the zone and hit a skyrocket to centerfield. It looked like it would be a routine flyout but since it was hit so high, the ball would carry out of the park for a two-run home run. That would be Geno’s 31st home run of the season and three batters into the home half of the first and the Mariners had a 3-0 lead.

Both teams would have some good threats in the 2nd. San Diego would get a couple of singles by Jake Cronenworth and Wil Myers. With two outs, Trent Grisham would run the count full, but Luis Castillo would land a fastball at the top of the zone to get Grisham looking for the third out. Sam Haggerty was caught stealing in the bottom of the 2nd, but J.P. Crawford reached on a walk and a Julio Rodriguez single put runners on the corners with one out. Rodriguez would try to steal, but Ty France hit a soft line drive to Cronenworth who was covering second and he would make the catch and double off Rodriguez at first to end the Mariner threat.

Castillo pitched around some two-out trouble in the 3rd and 4th, but the Mariners would break the game open in the bottom of the 5th. J-Rod would get hit to leadoff the inning and would then make history. Rodriguez stole second for his 25th stolen base of the season. J-Rod became just the third player in MLB history to have 25+ home runs and 25+ stolen bases in their rookie season. The other two, Chris Young in 2007 and Mike Trout in 2012, both did it after playing in a handful of games the previous year. Rodriguez is the first player to do it in the same year that they made their major league debut.

Ty France then was hit by a pitch as well and emotions started running high. The top two Mariners in the order had both been hit by the same pitcher in Clevinger. Seattle wouldn’t retaliate, but they would make the Padres pay. Carlos Santana stepped up with one out and destroyed a 2-2 changeup for a three-run bomb that lit a fire under the Seattle crowd. The 425-foot bomb put the M’s up 6-0.

Penn Murfee took over for Castillo in the 7th and the Padres would jump on Murfee. A leadoff double by Wil Myers would give the Padres a runner in scoring position with one out and Jorge Alfaro coming to the plate. Alfaro would put one in the gap for a double to score Myers and make it 6-1. Alfaro’s 14th double of the season would end the Mariners shutout attempt. Matt Brash would come on after Jurickson Profar lined out. Juan Soto drew a walk but Brash would have success against Manny Machado, only needing three pitches to strikeout Machado and end the inning.

Andrés Muñoz would be tasked with finishing off the 9th inning. It would be the dominant Muñoz we have seen all season. Muñoz struck out Trent Grisham and Jorge Alfaro swinging and got Jurickson Profar to fly out to Taylor Trammell in right to end the game. The Mariners got the 6-1 win and completed the homestand with a 4-4 record.

Seattle (80-62) needs just two more wins to guarantee a winning season. Tha Tampa Bay Rays defeated Toronto on Thursday morning 11-0. With that result, the Mariners and Blue Jays are tied for the top Wild Card, but the Mariners own the tiebreaker. Tampa Bay is just half a game back of Seattle and Toronto and Baltimore sits 4.5 games behind Tampa Bay. The Mariners are off Thursday and will be back in action on Friday at 6:38pm for the opener of a four-game series with the Los Angeles Angels (61-82). Robbie Ray (12-9, 3.56 ERA) will start for the Mariners in the opener against Michael Lorenzen (6-6, 4.70 ERA) for the Angels.

The Mariners were playoff contenders before the Trade Deadline. Luis Castillo has made them a contender to win the American League pennant. The top of the rotation of the Mariners can go toe to toe with any rotation in baseball. The X Factor for the Mariners is their speed. They have multiple players that can steal a base at any moment. If Dylan Moore can return, that will only make them more dangerous. Julio has been told to not steal as many bases in the second half but come playoff time he will have the green light. Singles and walks will become doubles and that is frightening for opposing pitchers. Speed kills. That makes the Mariners deadly.