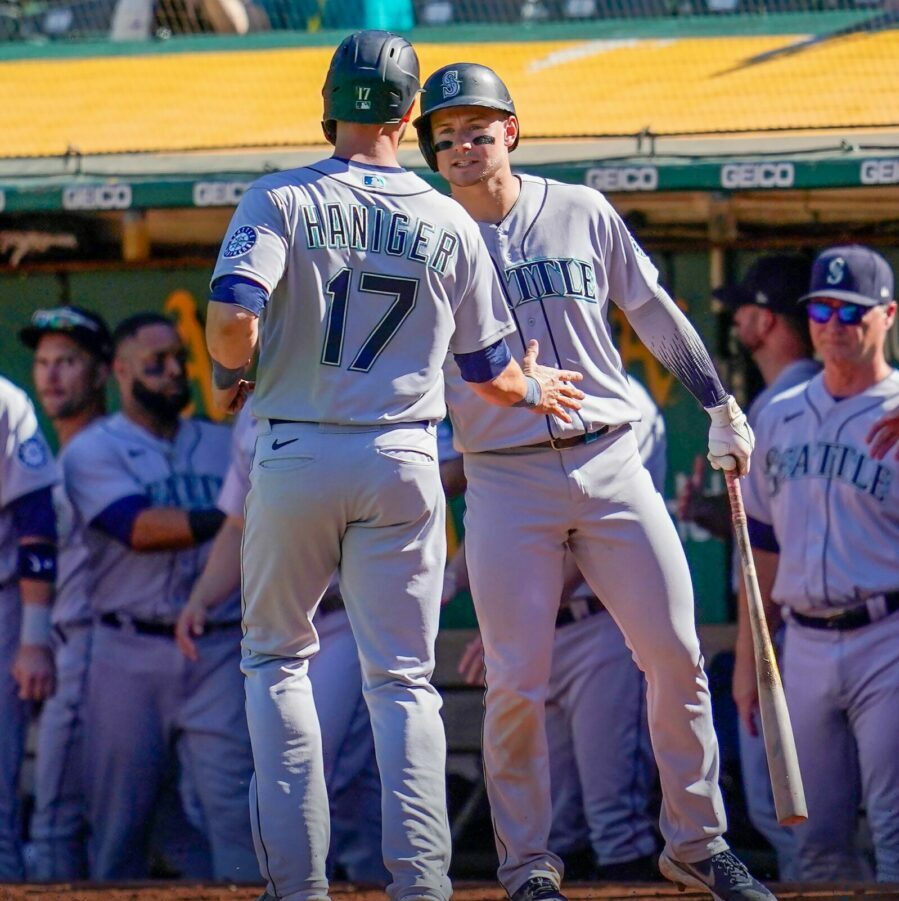 (Oakland, CA) Sometimes you don’t get to have everything go your way. After two months where the Mariners had a lot of things go their way, the ball has bounced the other way in recent weeks. Thursday was the latest example as in the first inning, Julio Rodriguez was pulled from the game with lower back tightness and is expected to go on the 10-day IL. Despite the early blow, the Mariners fought back from a two-run deficit as they avoided the sweep in Oakland with a 9-5 win.

Before Julio left the game, he made an impact on it. J-Rod would smash a double to left on the very first pitch of the ball game to jump start what had been a stagnant offense. Mitch Haniger would be up next and got the Mariners on the board with a base hit to right to easily score Rodriguez to make it 1-0 Mariners. They still weren’t done in the 1st as after a Carlos Santana strikeout, Ty France singled to right to move Haniger to second. After missing some time with a thumb injury, it looks like Cal Raleigh is finding his timing as he went opposite field into the left field corner for his 19th double of the season. Haniger would score and France would stop at third on the RBI double to make it 2-0 Seattle. Jarred Kelenic followed up with a walk to load the bases and then Jesse Winker would walk to score a free run and make it 3-0. Dylan Moore hit into a double play to end the inning but Seattle already had more runs in the 1st inning than they had in the rest of the series so far.

While the offense got off to a tremendous start, George Kirby would have one of the worst outings of his young career. After pitching out of trouble in the 1st and 2nd innings, the bottom of the 3rd would be a disaster for the young right-hander. A leadoff double by Vimael Machin and a single by Sean Murphy had runners on the corners with no outs. Kirby would then walk Seth Brown to load the bases in what was his second walk of the game. This was the first time George Kirby had walked multiple batters in the same game. Things would get worse as on the day that he announced this will be his final season, Stephen Vogt hit a triple down the right field line to clear the bases and tie the game at 3-3. After a groundout and a walk, Shea Langeliers would crank a double to center to give Oakland a 4-3 lead. That would be it for Kirby as Matt Brash took over, but Oakland wasn’t done. Brash walked Nick Allen and then Tony Kemp singled to left with the bases loaded to make it 5-3 A’s. Brash would strikeout Vimael Machin and got Sean Murphy to ground out to end the inning but the Mariners found themselves trailing now 5-3.

With the Mariners now trailing and missing their superstar, it was time for someone to step up. Enter the highly touted Jarred Kelenic who hadn’t exactly lived up to expectations so far in his MLB career. The third time might be the charm for Kelenic as he crushed his fifth home run of the season to right field to cut the deficit down to one. With the team fired up and the score now just 5-4, now was the time for the Mariners to make their move.

The top of the 6th would be when the M’s made that move. Ty France led off the inning with a triple to right for his first triple of the season. With the tying run on third with nobody out, Kirby Snead took over on the mound for Oakland starter Adrian Martinez. Cal Raleigh hit a hard grounder to Nick Allen at short that kept France on third with now one out. Once again, Kelenic would be the hero. The 23-year-old smoked a hustle double to center field to score France and even the game at 5-5. A wild pitch moved Kelenic to third, but a shallow fly ball by Luis Torrens would keep him there with two outs. The A’s decided to intentionally walk Dylan Moore for a lefty vs. lefty matchup as Adam Frazier faced Kirby Snead. Moore would steal second and with the count 2-2, Frazier would slap one down the left field line for a base hit. Kelenic and Moore both scored on Frazier’s 20th double of the season and the Mariners now had a 7-5 lead heading into the bottom of the 6th.

The lead would only grow from there on for the M’s. Mitch Haniger singled to start the top of the 7th. A wild pitch and a Carlos Santana groundout moved him to third with just one out. Ty France then smashed a fly ball to left that would be caught but was also plenty deep enough to score Haniger to make it 8-5. In the top of the 8th, a two out single by Dylan Moore turned into more trouble for Oakland. Moore would steal second and a throwing error by catcher Shea Langeliers moved Moore to third. Adam Frazier would come up with another two-out RBI with a base hit to right to make it 9-5 Mariners.

After having to come into the game early, the Mariner bullpen was incredible on Thursday afternoon. After the horrific third inning, the Mariners bullpen pitched the next six innings and only allowed one baserunner on a single in the 5th. The combination of Matthew Boyd, Paul Sewald, Diego Castillo, Penn Murfee, and Andrés Muñoz retired the final 15 batters in order to slam the door and give Seattle the 9-5 win.

With the win, Seattle’s magic number drops to 9 after Baltimore defeated Justin Verlander and the Houston Astros on Thursday night. If you aren’t familiar with the magic number, every time the Mariners win a game or the Orioles lose, it drops by one. If both happen, it drops by two. Once that number hits zero, the drought will officially be over. The M’s are still four games ahead of the Orioles and just half a game behind Tampa Bay and now 1.5 behind Toronto. Seattle (82-67) will now head to Kansas City (61-89) for their final three road games of the regular season. The three-game set opens up on Friday at 5:10pm when Marco Gonzales (10-14, 4.01 ERA) takes the mound for the Mariners against Brady Singer (9-4, 3.07 ERA) for the Royals.

Even when the Mariners win, we can’t just relax and enjoy the rest of the day. Julio will likely be headed to the IL and with Suarez there as well and J.P. Crawford banged up as well, this team needs some guys to get hot. Jarred Kelenic was fantastic on Thursday and hopefully that carries over into Kansas City. But this team needs Ty France and Mitch Haniger now more than ever. These are the top two hitters on this team and need to set the tone. If Frazier and Raleigh can get hot with the other three, everything will be just fine. If not, then buckle up Mariner fans because things could get bumpy.