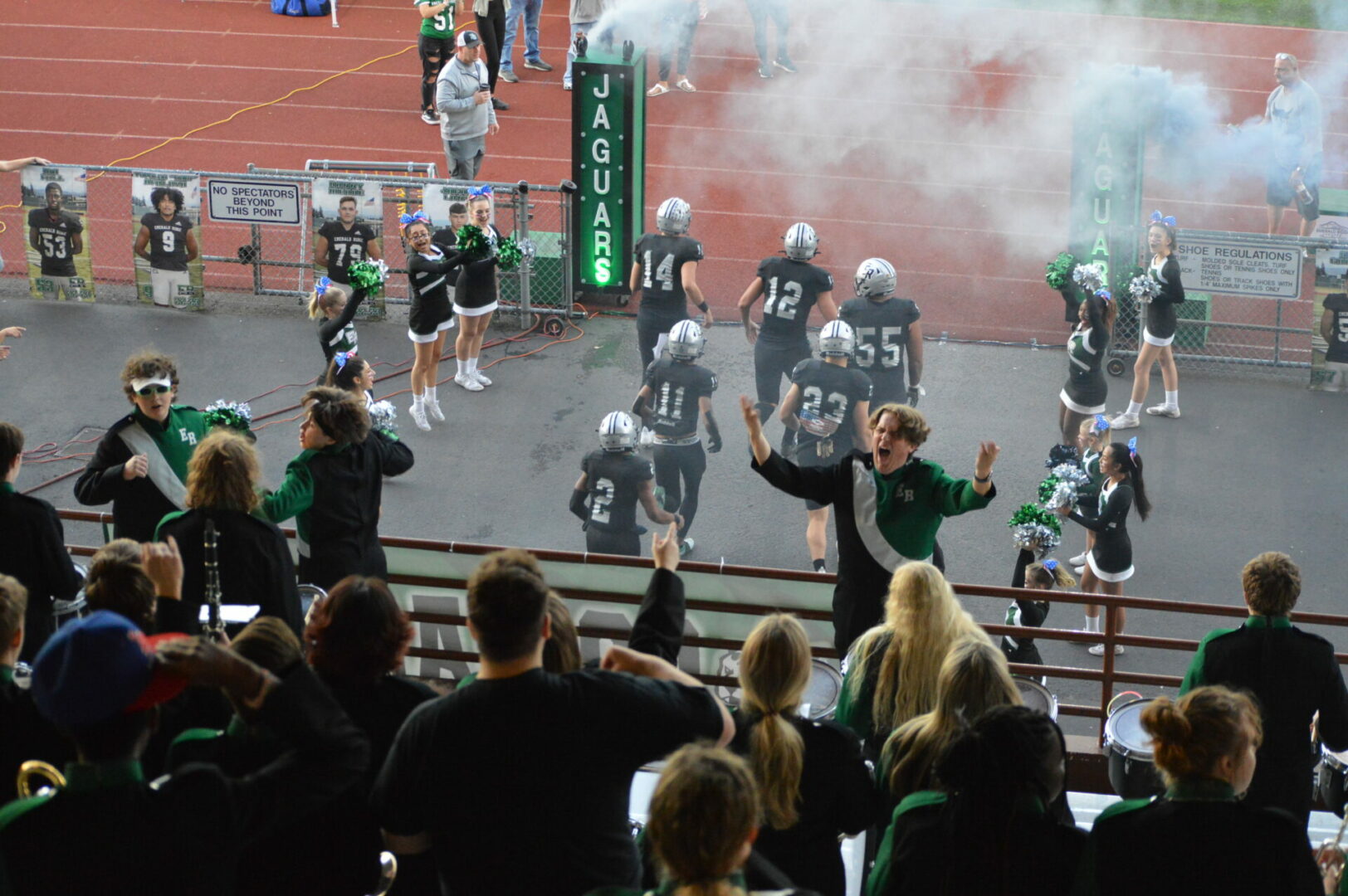 (Puyallup, WA) The Emerald Ridge Jaguars hosted the Curtis Vikings Thursday night and both came in with 2-1 records and both teams felt like they should be 3-0 with the Jags losing by just 1 to 3-0 Puyallup on opening night and Curtis falling to Sumner in week 2 after leading at halftime. Going into the game as the ESN crew prepared our broadcast we felt we were going to see both teams into the 30’s in points and that the offenses with 2 high profile Jr QB’s leading the way marching up and down the field. 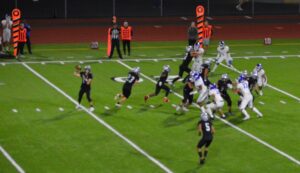 We couldn’t have been more wrong. Now Emerald Ridge did pile up a stack of yards and scored 42 points but the way the game was set up was based on special teams and defense. On the opening kick-off Jags kicker Brady Peterson laid up a perfect pooch kick with back spin at the Curtis 22 where there was a big gap. The E-R kick-off cover team nearly got the loose ball but the Vikings held on. But 3 run plays later they were punting.

Curtis QB Rocco Koch is also the punter and he boomed one to the Jags 6 yard line. The Jags took over and moved the ball to mid-field but had to punt it away and Peterson nailed a perfect coffin-corner punt hanging it high and when it hit took a left turn and rolled out at the 1-yard line sticking Curtis deep in their own end of the field.

It would be another 3 and out for the Vikings but this time the punt went off the side of the foot and Emerald Ridge got the ball on the Vikings 38. Two plays later and the Jags QB Jake Schakel found Giovanni Kafentzis for an 8-yard TD, Peterson hit the PAT and it was 7-0.

Emerald Ridge would dominate possession in the 1st half taking over with their 7-0 lead with 2:18 left to play in the 1st on their own 2-yard line after a brilliant Koch punt. The Jags would dig their way out of trouble and drive down to the 14 yard line of Curtis and were threatening to take a 14 point lead. Schakel dropped back and threw a low ball to his left that got slapped up in the air by one of the Vikings defensive linemen and Xavier Ahrens intercepted on the 12 yard and took it to the house for an 88-yard Pick 6 and tied the game at 7-7 with 8:15 left to play in the half.

The Jags got the ball back on the kick-off and began on their own 30 yard line and went on a 13-play drive, 8 running and 5 passing and capped it with a 19-yard touchdown pass from Schakel to Kafentzis with 27-seconds left to play in the half to go up 14-7. Emerald Ridge held possession of the ball in the 2nd quarter for 11:33 of the 12 minutes. For the half Emerald Ridge had the ball for 18:42 of the 24 minutes but only led 14-7.

In the 2nd half the Jags came out but had to punt the ball away and Curtis would have their chance to get their offense rolling starting from their own 18. They would pick up a couple of 1st dons and moved near midfield but faced a 4th and short. Down just 7 they sent out the punt team. Koch being the punter there is always a chance for a fake and the Vikings decided this was the time to do it and Koch looked to dump off the pass in the flat to Lynden Tanoa but the Jaguars Jacob Lane had other ideas and he read the play perfectly jumped the pass and took off for his own Pick 6 for 42 yards. Emerald Ridge went up 21-7 and the momentum shifted.

That would be the spark that saw the Jags offense score 3 more times with touchdown passes to Kajon Babcock a 2-yard toss then a 33-yard laser to Kafentzis his 3rd score and Lane would take a catch for a 19 yard score with a fierce run to paydirt.

Curtis’s best drive was early in the 4th quarter and still a chance to make a game of it when Koch and offense took over on their own 40 and on 3rd down from the 39 Xavier Ahrens shook the defender with a deep crossing route and Koch didn’t miss but the PAT was wide so it was 28-13. Curtis then lined up for an on-side kick and Joe Carini hit a perfect bouncer that the Vikings recovered right on the 50-yard line. The thought of any comeback was then ended when Logan Lisherness picked off Koch on the 1st play from scrimmage and the Jags got the ball back on the Viking 31.

Emerald Ridge got big efforts from their defense with Lane, Ezekiel Stefano and Bam Afalava up front pressuring Koch and shutting down the running lanes. Daylen Mathews, Sean Tutty and James Gonzales with Lisherness were stingy at linebacker. Offensively the Jags did crank up more than 400 yards of offense with Schakel going 20/26 for 294 yards and 5 touchdowns but with 2 1st half interceptions. Lisherness rushed for 57 leading the ball carriers and Kafentzis caught 8 for 152 and the 3 touchdowns.

Curtis got strong efforts from Bryce Bouyer who was able to pressure Schakel and Kellen Hazen in the middle of the defensive line did well to keep the Jags inside running game from really gaining momentum.

This game was decided though by field position, defense and ball control. The punt to the 1 yard line by Peterson, his controlled kicks and really determining field position never allowed Curtis to find any kind of rhythm for the entire 1st half and then the pick 6 by Lane in the 3rd really turned the game and Curtis could never catch up.

For his efforts and to us game determining field position influence our MVP of the game went to Jaguars kicker Brady Peterson. He highlighted what a smart kicking attack in all facets can do for your team and how that can enhance your chances of winning.

Emerald Ridge improves to 3-1 and will travel to South Kitsap next week while Curtis drops to 2-2 and will look to rebound next week at home against Bellarmine Prep.

ER’s Jake Schakel on getting to 3-1

Jags re-take lead late in the half Schakel to Kafentzis

ER’s Jacob Lane says No to the fake punt idea