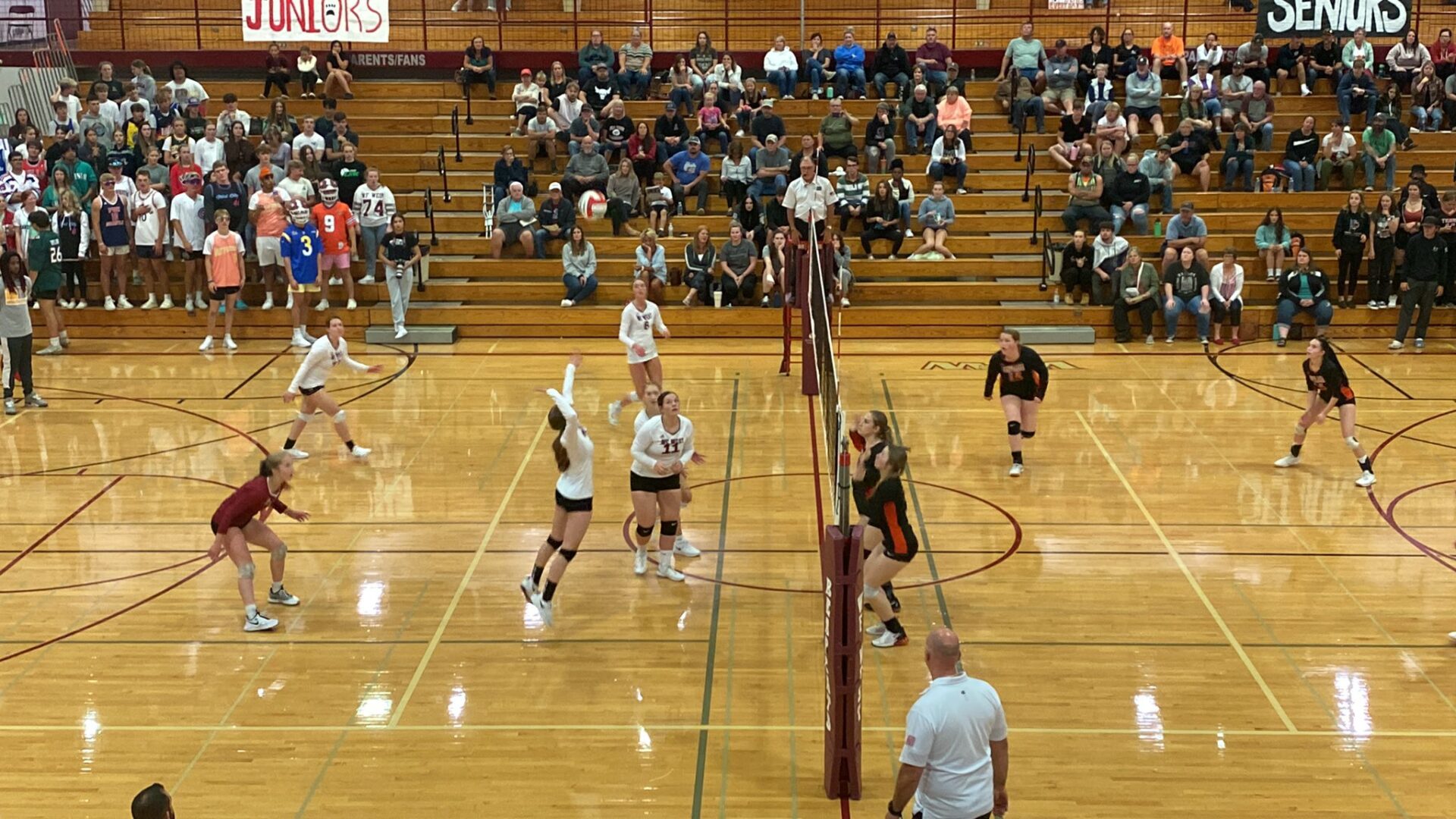 (Chehalis, WA) Both the Centralia Tigers and the WF West Bearcats were coming off of league opening matches on Tuesday but had different results in their openers. WF West dropped their opener to Tumwater 3-1 while Centralia took their opener over Shelton 3-2. The two rivals came into this one looking to send a message to the rest of the 2A Evergreen Conference and the intensity from both sides was there from the first serve to the final point. When the dust settled, it was the Bearcats taking the victory in five sets.

Both teams started the opening set by trading points for the most part early. The Bearcats would finally go on the first run with Saige Brindle serving four consecutive points for WF West with two aces on that run to put the Bearcats up 12-6. The Tigers would chip away at that deficit with Tatum Johnston getting a couple of aces in a row to get Centralia back in the set at 16-18. The Bearcat trio of Morgan Rogerson, Mari Ceesay, and Chloe Chloupek would take control at the net towards the end of the set and with a 22-20 lead, Chloupek served the final three points for WF West, and they fought off the Tiger rally to take the opening set 25-20.

The second set started the same as the first in the fact both teams just traded points in the beginning. Then some communication issues would cause WF West to fall behind 6-13. This time, it would be Centralia’s Peyton Smith with three straight points from the service line with two aces to give the Tigers a fairly comfortable 17-9 lead. The Tigers would use Lauren Wasson, Tatum Johnston, and Emily Wilkerson at the net with great backline play by Gracie Schofield to keep the Bearcats far enough away for Centralia to take the set 25-16.

With the match even at 1-1, it was a pivotal third set for both squads. The third set would be extremely intense on both sides because the implications it would have on the match. It was for the most part the best played set by both squads but WF West would pull ahead 19-15 thanks in part to fantastic setting by Savannah Hawkins and great kills by Rogerson and Ceesay. The Tigers would then make their move. Centralia fed off a big block by Lauren Wasson and went on a run to even up the set at 20-20. WF West head coach Robert Lucas took a timeout that ended up working out perfectly for the Bearcats. They would grab a 21-20 lead and Ava Brenner served four straight points with two aces to give WF West a 25-20 third set win to go up 2-1.

In the fourth set, it was the same old same old with both teams trading points the entire way with neither side getting ahead by more than two points. Centralia would be leading 17-15 with Gracie Schofield serving and Centralia flipped the switch. Schofield served eight consecutive points for Centralia and Lauren Wasson could do no wrong as she completely took over the match and the Bearcats had no answer for the junior. The phenomenal run and great comradery of the Tigers helped them run away at the end of the set 25-15 to take the match to a winner take all fifth and final set.

The fifth set started with one of the best rallies of the entire match. The Bearcats would win the point and never looked back after that. Five straight points served by Ava Brenner gave WF West an 8-1 lead and their dominance at the net led the rest of the way. The Bearcats put the match away taking the fifth set from Centralia 15-4 to win the match 3-2.

Our Thorbeckes MVP of the match was Morgan Rogerson for the Bearcats. She led the way with a game high 11 kills and also recorded three aces from the service line. Savannah Hawkins dished out 17 assists for WF West as well. Lauren Wasson led Centralia in kills with 9 while Peyton Smith recorded a game high 26 assists for the Tigers.

Tigers Pull Away With 4th Set