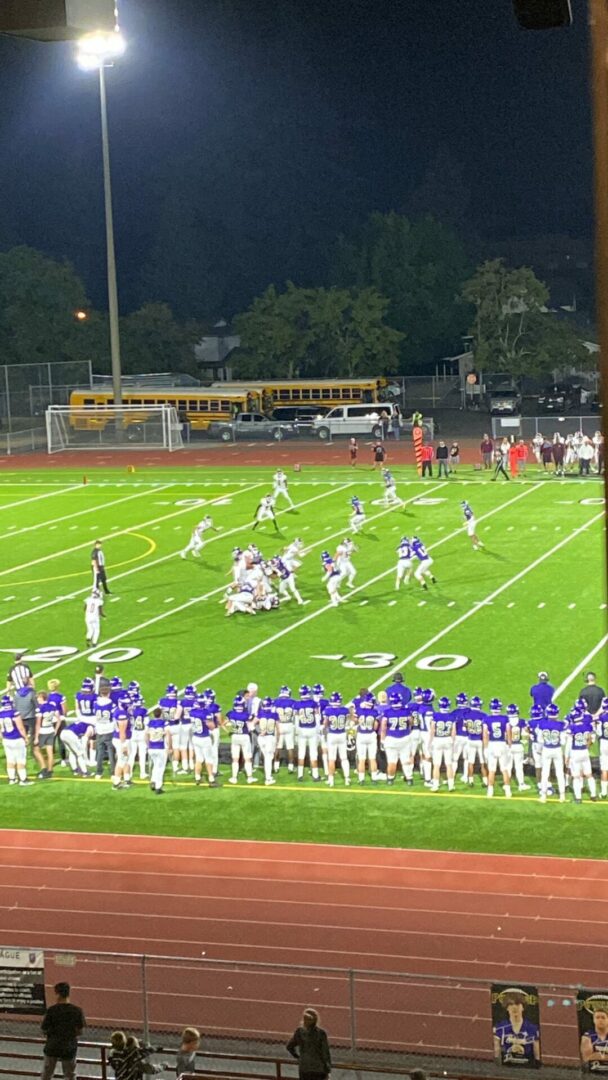 Two top #10 teams collide on Friday night in the Valley Battle Rivalry game as the AP 4A # 9 ranked Sumner Spartans (2-1) look to keep their 4A SPSL title hopes alive as they travel to Carl Sparks Stadium to face the #3 ranked team in 4A in the undefeated Puyallup Vikings (3-0).

Puyallup has been the talk of the 4A SPSL after coming back from a large deficit to edge rival Emerald Ridge 29-28 in the season opener, then followed it up with a 30-13 drubbing of defending 4A state champions Graham Kapowsin. That caught the attention of the entire state but faced what some might call a “trap game” in South Kitsap last week and rallied after falling behind 7-0 to score 28 straight points in the 28-7 victory over the Wolves.

Puyallup is now in control of their own destiny in the SPSL title race after wins over two team in Emerald Ridge and Graham Kapowsin who are both in the 4A AP top 10 rankings, and a Vikings win over a Sumner team ranked #9 in the AP poll would be huge for Puyallup under 2nd year Head Coach Brian Groat.

On the other side, Sumner has been a slow starting team in 2022, falling behind at half-time in each of their 3 games, causing some frustration for long-time Head Coach Keith Ross and his team. In each game, they stormed back in the 2nd half, winning close games with Bellarmine and Curti beforestrailing 21-3 at half last week against rising contender Emerald Ridge in the 28-18 loss.

The Spartans will turn to their offensive line and Jr running back Matt Spurbeck who also plays safety to have a big game in the running game. Spurbeck ran for over 100 yards in all 3 games and looks to do the same against a tough Puyallup defense. Senior Princeton commit Jay Mentink has been the top playmaker for the Spartans and is also a two-way starter; Mentink had a big second half to lead the Spartans rally last week, getting a receiving touchdown and interception in the loss. Senior dual-threat QB Kayde Bodine has had some nice moments in each game this season, but last week a interception late proved costly for Sumner.

The Spartans had a difficult match-up last week with an Emerald Ridge team with one of the best passing offenses in the SPSL, and Puyallup will test Sumner again this week with an explosive attack.

The Vikings average 29 points per game and have explosive playmakers all over the field, starting with wide receivers Dane Parker and Malachi Durant. Parker is a Senior committed to Air Force and similarly to Mentink for Sumner, does everything for Puyallup. He had 13 tackles defensively but also caught a 41-yard touchdown pass and rushed for another in the win over South Kitsap. Durant is a Jr who is widely regarded as one of the top recruits in the state for the class of 2023. A 3-star recruit, he already has offers from 8 power-5 schools including the 4 major schools in the Northwest in Washington, Washington State, Oregon and Oregon State.

Durant is a player who can change the game at any point, Puyallup was on upset alert in a tie game with South Kitsap when Durant went off for two big TD receptions in the 2nd half to help the Vikings pull away. He is also a difference maker on defense as well.

The quarterback situation is interesting at Puyallup, with Sophomore Kaden Rolfsness and Senior Jacob Velasco both getting snaps at the position. Velasco is a player who can do it all and can also catch passes, while Rolfsness is very poised and can throw precise strikes down field.

Pre-game coverage begins at 6:45 on NFHS and elisportsnetwork.com on Friday evening with kickoff at 7 PM.

You can watch the  game on the NFHS Network live or on-demand. Subscriptions are $11.99 per month and gives you access to the entire NFHS Network all across the country to watch the live broadcasts or any on-demand games. Literally hundreds of thousands of hours of game content. Go to https://www.nfhsnetwork.com/affiliates/eli-sports-network to sign-up if you don’t have a subscription or to find the on-demand replay of this game.