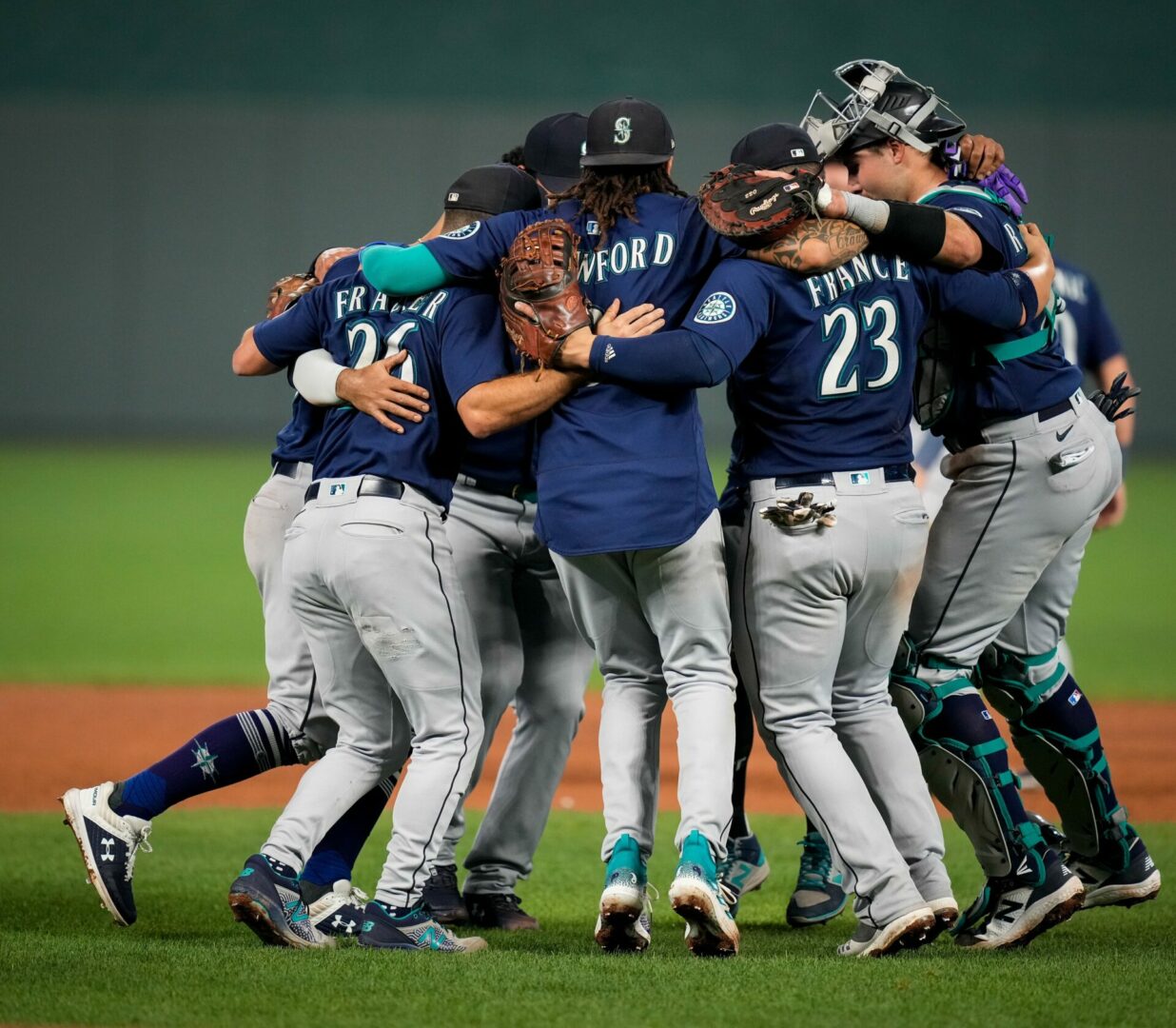 (Kansas City, MO) Regardless of what happened at Kauffman Stadium on Saturday night, it was going to be the second biggest story surrounding the Seattle Mariners. Earlier in the day, the Mariners signed their big trade acquisition Luis Castillo to a five-year extension with an option for a sixth year in 2028. The flamethrower immediately became a fan favorite in his month and a half since joining the Mariners. That might have been the spark that Seattle needed as the M’s battled back from an early deficit to take game two of the three game series over the Kansas City Royals 6-5.

The earliest deficit would actually belong to the Royals. In the top of the 1st, Ty France slapped one that just stayed fair down the right field line for his 25th double of the season. Mitch Haniger joined him on base with a walk, but a Carlos Santana fly out wouldmake Royals starter Kris Bubic one out away from escaping early trouble. He would not get that out right away. Dylan Moore lined a base hit to left field that scored Ty France easily from second to give the Mariners a 1-0 lead.

That lead faded oh so quickly. With Logan Gilbert on the mound for the M’s, they recorded two quick outs to begin the inning. Things got rough after that. Veteran catcher Salvador Perez doubled to left to put the tying run in scoring position with two away. Mariner killer Vinnie Pasquantino continued to haunt the Mariners as he launched his ninth home run of the season with a two-run shot to right center. Just as quickly as Seattle had taken the lead, they had lost it. It was 2-1 Royals.

Seattle would again answer with a quick counter. Jarred Kelenic hit a double to leadoff the top of the 2nd for his fifth double of the season. Kelenic has doubled now in three straight games since returning to the big league club. He would advance to third when Luis Torrens lined out to right for the first out, but a Curt Casali strikeout hurt the Mariners scoring threat. It didn’t matter to J.P. Crawford as the Mariner captain slashed one to center field for a two-out RBI single to tie the game at 2-2.

You guessed it. The Royals struck right back in the bottom of the 2nd. With one out, Kyle Isbel doubled to right on the first pitch he saw to bring up Drew Waters. Waters would put one into the right field corner and it turned into all sorts of trouble. Isbel easily scored from first and Waters ended up on third with his first career triple. Gilbert would induce two weak groundouts to keep Waters from scoring but the Royals had retaken the lead 3-2.

The bottom of the 3rd looked like big trouble for Gilbert and the M’s. Kansas City loaded the bases with nobody out after a Bobby Witt Jr. single, a Salvador Perez hit by pitch which riled up both teams, and a walk to Pasquantino. Gilbert got a massive strikeout of Michael A. Taylor for the first out but Nate Eaton would drive in a run with a sacrifice fly to Haniger in right to score Witt Jr. and make it 4-2. Kyle Isbel then grounded out to put an official end to the big time threat.

In the top of the 4th, the Mariners would chip away at the deficit. With two outs, Bubic hit Curt Casali in the knee which drew warnings from the umpires to both teams. J.P. Crawford drew a walk and Ty France made the Royals pay for the two-out baserunners. France lined one to right for a base hit to score Casali easily while Crawford was stopped at third. While Haniger struck out to end the inning, the Mariners had gotten a run back and made it 4-3.

Once again Kansas City got that run back immediately. Drew Waters would begin the inning with a single and moved to second on a sacrifice bunt. With two outs, Royals star rookie Bobby Witt Jr. did his job with a knock to left to score Waters and make it 5-3. Gilbert would finish the inning and the 5th but that would be the end of his outing. The second year Mariner went five innings with seven hits and five runs allowed, while walking one and striking out three.

In the top of the 6th, the M’s would go to their bench to try to spark a rally. Jesse Winker pinch hit for Luis Torrens to start the inning against new Royals pitcher Collin Snider. Winker won the lefty-on-lefty matchup with a ground ball up the middle for a base hit. Cal Raleigh dug in next and would make Mariner history in the process. Raleigh launched a no-doubter to right field for a two-run shot to tie the game at 5-5. It would be Raleigh’s 25th home run of the season which ties Mike Zunino for the most ever by a Mariner catcher in a single season.

The M’s would then blow two golden opportunities to take the lead. They would load the bases with nobody out in the top of the 6th but couldn’t get a run in so the game stayed tied. Then, in the top of the 8th, they loaded them up again with just one out. Adam Frazier unfortunately hit a grounder up the middle that took the second baseman right to the bag for a routine 4-3 double play to end that threat as well. The Mariners were wasting scoring chances but the bullpen wasn’t allowing Kansas City to to get anything going either. The game headed to the 9th still tied at 5-5.

With one out in the top of the 9th, Jarred Kelenic hit a solid grounder that was somehow fielded by shortstop Bobby Witt Jr. While the stop was impressive, Kelenic has too much speed and beat out the play at first for an infield single. Jesse Winker then singled once again to center to put runners on first and second with one out. It would be a Raleigh rally again as the Mariner catcher smacked one to left field that just stayed in the ballpark but banged off the wall. Kelenic scored easily while Winker was held up at third as Raleigh’s 20th double of the season gave the Mariners a 6-5 lead.

They wouldn’t add on and headed to the bottom of the 9th with a one-run lead and Andrés Muñoz coming on to pitch. He would get Kyle Isbel to groundout to start the inning, but Drew Waters grounded one up the middle for a base hit. Edward Olivares pinch hit next and he sunk all the hearts of Mariners fans everywhere. Olivares crushed a fly ball to left that looked like it would be a walk-off home run. Instead, Sam Haggerty camped on the warning track and made a routine catch for a long second out. MJ Melendez would hit a weaker fly ball to left center and Kelenic would make the catch to end the game and preserve a 6-5 win for Seattle.

With the win, Seattle (83-68) moves to just half a game behind Tampa Bay for the second Wild Card spot and 1.5 behind Toronto for the top spot. The Blue Jays defeated the Rays on Saturday and the two teams meet again on Sunday. Baltimore lost an 11-10 thriller to Houston so the M’s extended their lead over the O’s to four games and their magic number is now down to 7. The Mariners will play their final road game of the regular season in the rubber game of their three-game series against Kansas City on Sunday at 11:10am. The newly extended Luis Castillo (7-6, 2.85 ERA) will look to break in his new contract as he duels against rookie Max Castillo (0-1, 2.97 ERA) in a battle of the Castillos.

I can not tell you how thrilled I am that Luis Castillo will be a long term Mariner. He has given me Felix Hernandez vibes since he made his team debut in Yankee Stadium and he has a fantastic personality that meshes so well with the rest of the club. This rotation is going to be one of the best in baseball for years to come with Castillo, Ray, Gilbert, and Kirby with Marco mixed in as well. This isn’t the same old Mariners front office anymore. They are going for it. The pitching is pretty much locked in for next season. It is all about offense now and the team has shown that they are willing to spend. This winter should be interesting.