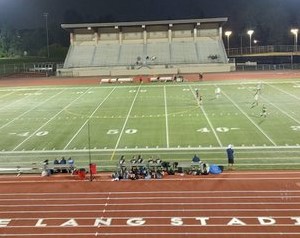 (Lakewood, WA) – The Lakes Lady Lancers girls soccer program had a tough start to the season losing their 1st 3 matches, but the Lancers have started to find their mojo as they beat the Lincoln Lady Abes 9-0 on Tuesday night at Harry Lang Stadium. It was the 4th straight match without a loss for Lakes.

The match went the first 26 minutes or so without a goal, but when they did it came in a hurry as Sophomore striker Mackenzie Balatbat scored to make it 1-0 Lakes. A couple minutes later, Junior attacker Ramera Bradley scored her first goal to increase the lead to 2-0 and in the later stages of the first-half did so again to push it to 3-0 at halftime.

The Lady Lancers continued to press forward in the second half and overwhelmed a strong-spirited, yet over-matched Lincol squad. Lakes scored a season high 6 goals in 2nd half to get the 9-0 win, as freshman Savannah Newville preserved the shutout, her 4th straight on the season.

Lakes improves to 2-2- in the PCL, and have played themselves into the mix for the post-season after a slow-start to the season. They now shift focus to face Mount Tahoma on Thursday.

With the loss, Lincoln is now 0-5 on the season overall and in the PCL.

Lakes strikes first in their match with Lincoln

The Lancers quickly doubled up their lead