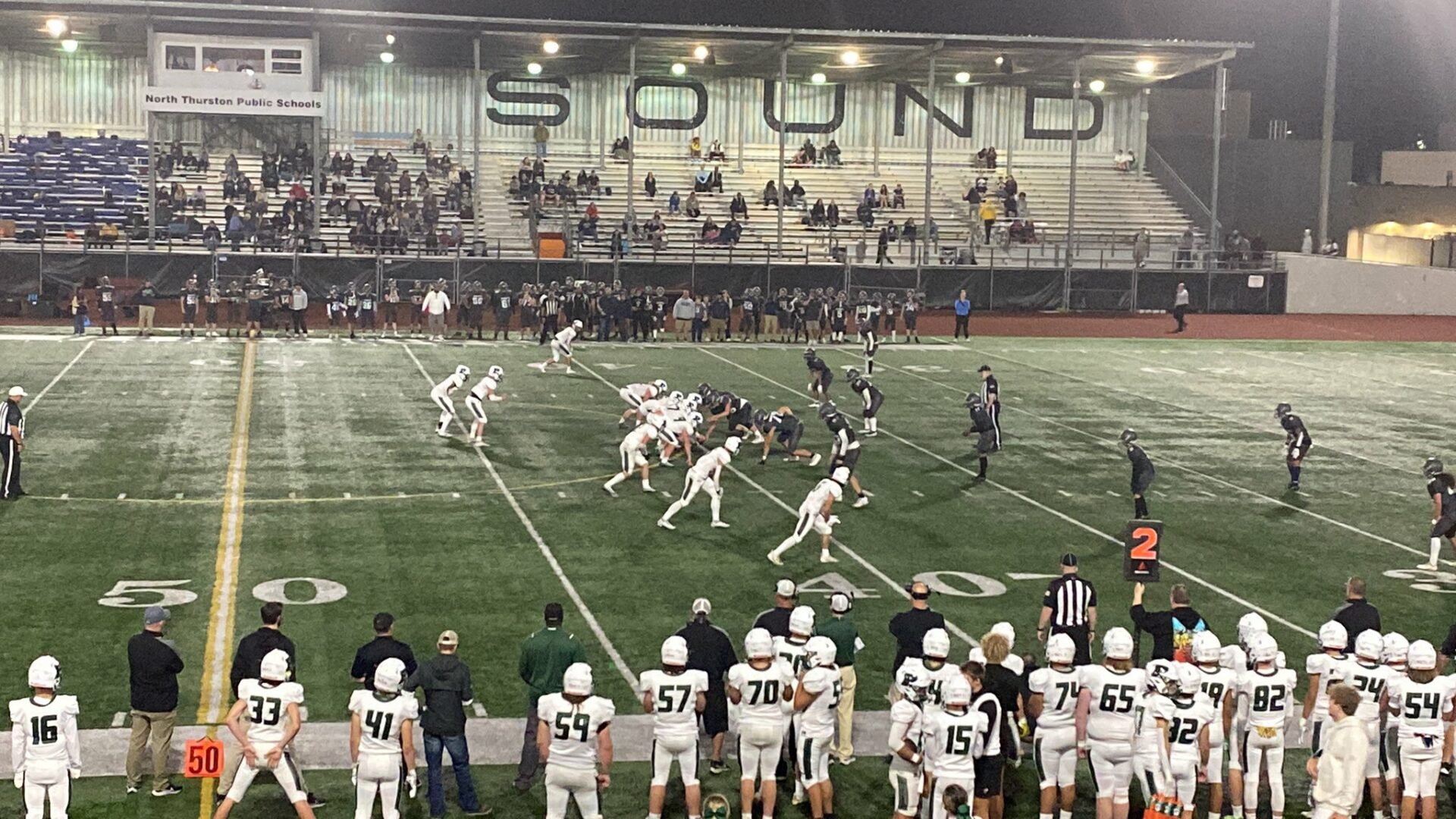 (Lacey, WA) In a Thursday night showdown in the 3A South Sound Conference, the Peninsula Seahawks headed to South Sound Stadium looking for their fourth straight win over the River Ridge Hawks. The Hawks came into the game off a tough loss to top ranked Yelm but had played a couple of close matchups in the weeks prior to that.

The Peninsula Seahawks meant business as they marched down the field on their opening possession and found the endzone on a 26-yard touchdown pass from Payton Knowles to Isaac Smith to give the Seahawks the early 7-0 lead.

The River Ridge offense couldn’t get anything going on their opening drive as they had a quick three and out and punted the ball back to Peninsula. The Hawks would make a play on this drive as they deflected a pass and in a textbook example of the tip drill, Keoni Aguon hauled in the interception to give River Ridge the ball in Peninsula territory. The Hawks capitalized on the turnover on a 3rd and goal from the 10-yard line as Darian Harper kept the ball on a QB draw and ran it in for the 10-yard score. River Ridge missed the PAT but got on the board trailing 7-6.

It would be a good bounce back drive for Peninsula on their next possession. Utilizing five different rushers and the arm of Payton Knowles, the Seahawks marched down the field and got another touchdown pass from Knowles. The senior quarterback found Dane Meddaugh this time for a four-yard score to make it 14-6 Seahawks.

River Ridge had another good drive going as they fed running back Ronaldo Gonzalez-Salazar with a couple of good passes from Darian Harper to Key Croft and Kekoa Kopp. Harper would then take a shot deep but the size of safety Dand Meddaugh came into play as he went up to haul in the interception to give Peninsula the ball at the two. The Seahawks marched the ball 98 yards just before halftime and a reverse flea flicker resulted in Knowles’ third touchdown pass of the half as he found Isaac Smith for a 40-yard touchdown to give Peninsula a 21-6 lead at halftime.

The second half was a completely different story. Would kickoff with a pooch kick and the Seahawks would recover to get an extra possession. Isaac Smith would score on a five-yard carry to make it 28-6 Peninsula. The defense of the Seahawks dominated the entire second half and did not allow anymore points for River Ridge.

Peninsula added on offensively throughout the second half. Isaac Smith added an 18-yard touchdown while Landon Watson had touchdown runs of one and two yards to put the game away for the Seahawks. When the final horn sounded, it was Peninsula getting their fourth straight win 48-6.

Our MVP of the game was Isaac Smith who touched the ball six times on offense and had four touchdowns. Smith carried the ball four times for 30 yards and had two catches for 76 yards. He was also the returner for Peninsula and gave the offense great starting field position multiple times throughout the game. Payton Knowles went 15-22 through the air for 227 yards and three touchdowns while rushing seven times for 42 yards. For River Ridge, Darian Harper went 5-12 through the air for 57 yards and had six carries for 21 yards and a touchdown. Ronaldo Gonzalez-Salazar had 16 carries for 79 yards for the Hawks as well.