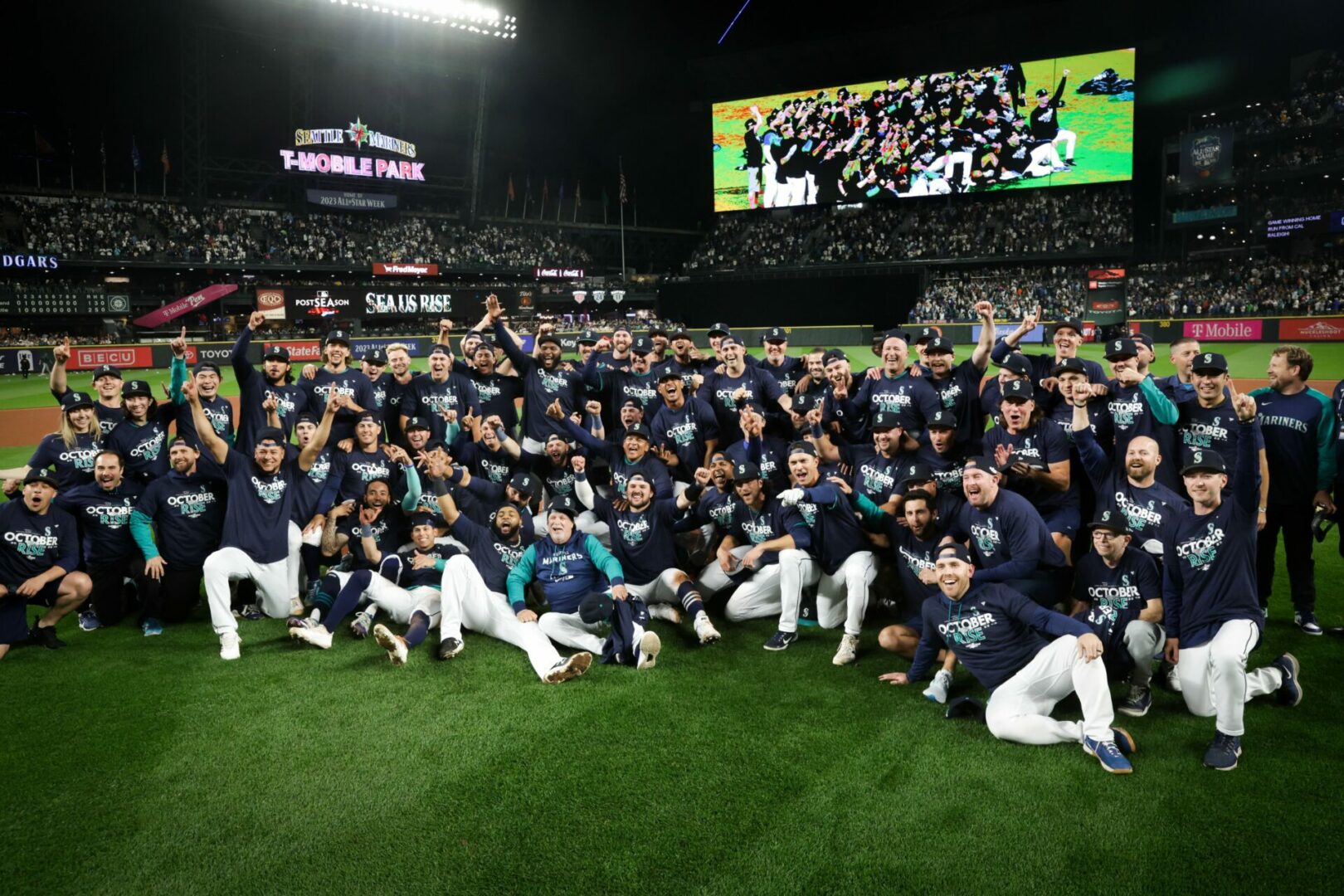 (Seattle, WA) You would have to be living under a rock to not have heard that the Mariners are playoff bound in 2022. You would have had to been living under a rock for 20 years to not know that the Mariners have the longest active playoff drought in North American sports. Sorry…HAD the longest active playoff drought in North American sports. After the Baltimore Orioles defeated the Yankees in the early stages of the Mariners game, everyone got their wish. It would need to be the Mariners winning and sending themselves to postseason. Of course, in typical Mariner fashion, the team had to do it in dramatic fashion. The job was done and the team and fans got to party after the Seattle Mariners defeated the Oakland A’s 2-1 to clinch a playoff spot.

There wouldn’t be much scoring in this game. It would start early though as the Mariners landed the first blow in the bottom of the 1st. Dylan Moore led off with a single to center and then recorded his 21st stolen base of the season when he swiped second. Ty France would then lace one to left for extra bases. Moore scored easily and France was in at second with his 27th double of the season and the Mariners had a 1-0 lead.

That lead was gone just half of an inning later. A one out walk by Conner Capel was erased when he tried to steal second. Luis Torrens would gun down the would-be base stealer for the second out. Shea Langeliers got a slider that hung in the middle of the plate and he would not miss it. The rookie crushed his fourth home run of the season and tied the game at 1-1.

Double plays helped both teams stay out of trouble for the most part in the game. The Mariners had a runner on second with one out in the bottom of the 4th, but back-to-back strikeouts ended that inning. Runners would be on first and second with two outs in the 7th for Seattle, but a J.P. Crawford groundout ended that threat.

Logan Gilbert was utterly dominant on the mound. Aside from the Langeliers home run, no Oakland baserunners made it past first in the game. Gilbert would go a career-high eight innings, only allowing three hits with one run, two walks, and four strikeouts. Matt Brash came in for the top of the 9th and pitched an easy 1-2-3 inning. That sent the game into the bottom of the 9th, tied 1-1, with the ending of the playoff drought in the Mariners grasp.

Domingo Acevedo would get two big strikeouts of Mitch Haniger and Carlos Santana. That would bring up Cal Raleigh who was pinch hitting for Luis Torrens. Flashback to April when Raleigh was hitting .083 and was being sent back down to Triple-A. He would then return and tie the single season Mariner record for home runs by a catcher. Now, he had the most important at-bat by a Seattle Mariner since 2001. The count ran full. It was what every kid has dreamt of in their backyard. Full count, two outs, tied game, 9th inning, playoffs on the line.

The dream then came true. Raleigh launched a deep drive to right field and off the Hit It Here Cafe for a walk-off, drought ending home run that sent the Pacific Northwest into a frenzy. It would be Raleigh’s record setting 26th home run of the season which is now the most in a single season by a Mariner catcher. There was nothing but smiles from players and fans as Cal Raleigh signaled it was over as he touched home plate to give the Mariners a 2-1 win and a spot in the playoffs.

With the long playoff drought over, the Mariners will now shift focus to seeding. Seattle (86-70) still hold the second American League Wild Card spot. Seattle is just half of a game ahead of Tampa Bay and just 1.5 games behind Toronto for the top spot. Toronto will take on Boston on Saturday while Tampa Bay visits the Houston Astros. The M’s will continue their three-game series against the Oakland A’s on Saturday at 1:10pm. Luis Castillo (7-6, 3.06 ERA) will try to find a way to beat Oakland as he faces Adam Oller (2-7. 6.01 ERA) as a late replacement for JP Sears for Oakland.

I can’t find the words to write that can truly explain how I and the rest of the Mariners fandom feel. It has been so many years of frustration and sadness. For that to build up and get so close so many times just to fall short is heartbreaking. But this moment made it all feel worth it. This fanbase deserves this moment. This team deserves this moment. And the M’s did it their way. A close game in the 9th inning and down to the last out. Not a team of nationally recognizable names, but a team of guys that care about one another. They care about the game of baseball and they care about the fans in the Pacific Northwest. Every single one of these players will go down in Mariners history as the drought enders. I hope these players and coaches and the guys in the front office know how grateful the fans are for all of them and how thankful they are for all the work put in behind the scenes. This was a legendary night in Seattle sports history. Hopefully, there is never a drought like this again for Seattle sports, but hopefully there is another party like this in about a month. Cause this team is just getting started. Stay loud Seattle. Go M’s.