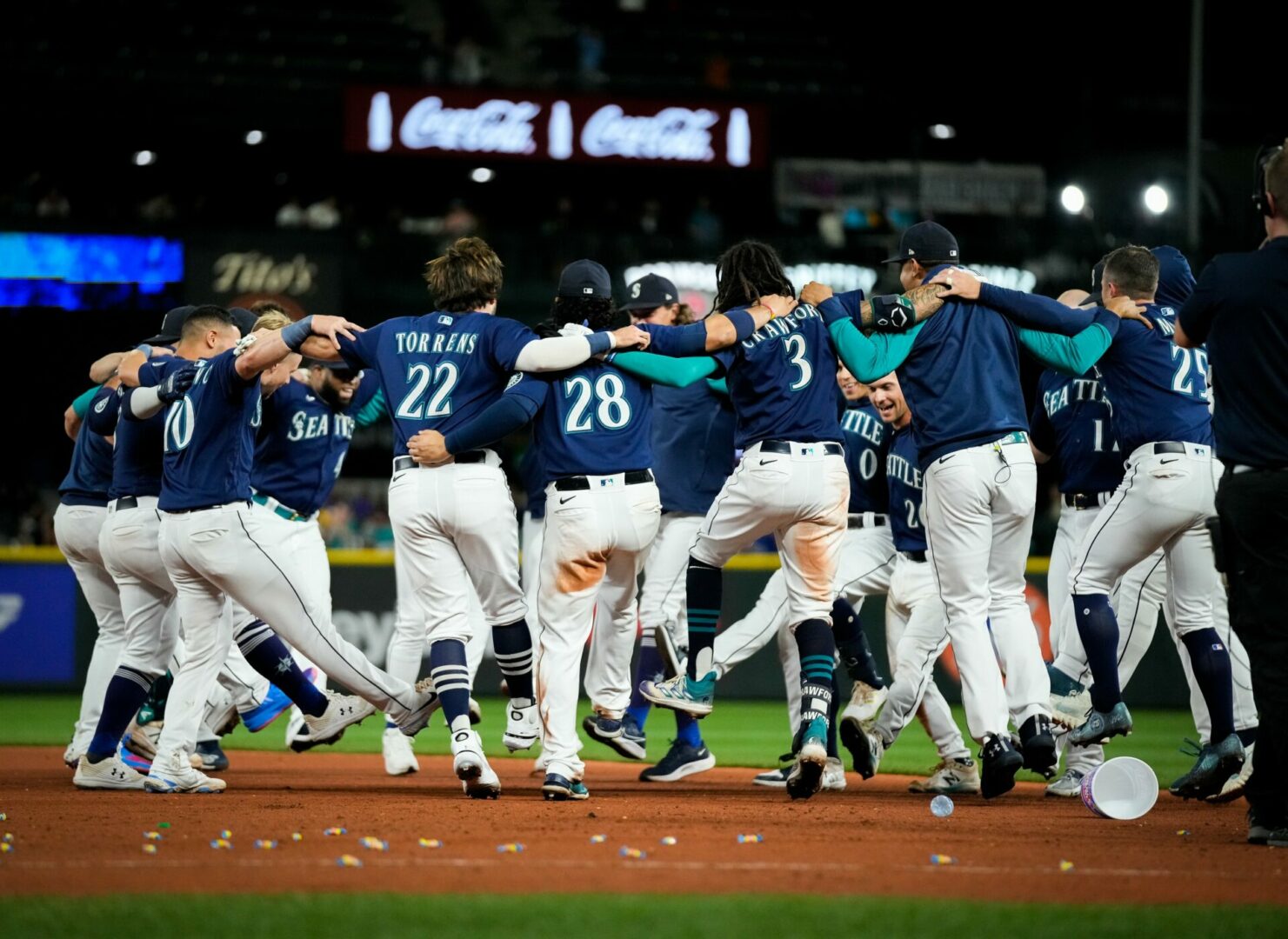 (Seattle, WA) I was just four years old the last time that the Seattle Mariners were in the postseason. Since then, I started kindergarten, graduated high school, graduated college, saw the Xbox released, and saw three different actors rock the role of Spider-Man. There hasn’t ever been a Facebook post or a Tweet ever about a live Mariner playoff game. On Thursday night, the Mariners put themselves in a spot that would have them go down in Seattle sports history. Thanks to a Baltimore Orioles loss and the Mariners digging deep to beat the Texas Rangers in extra innings, that magic number is down to 1.

Marco Gonzales got the start for the Mariners and looked fired up as he struck out the side in the top of the 1st. The M’s would jump out to the early lead in the bottom of the 1st after a Ty France single with one out got the offense going. Mitch Haniger then crushed a ball into the Pen for his 8th home run of the season and the crow was already rocking with a 2-0 lead.

In the top of the 3rd, Texas would get to Marco and start their home run barrage of Mariner pitching. Sam Huff led off the 3rd with a long home run for the rookie’s fourth of the season to make it 2-1. With one out, Josh H. Smith reached on a single to flip the lineup with Marcus Semien coming to the plate. The first year Ranger lined one into the bullpen for a two-run shot for his 25th of the season. Just like that, Texas had taken a 3-2 lead. They weren’t done in the 3rd as Adolis Garcia showed off his power with a solo shot to left for his 26th on the year to make it 4-2 Rangers.

The M’s just wouldn’t stay down in this one. Ty France recorded his second single of the game with one out in the bottom of the 3rd. Two batters later, Mitch Haniger would record his second home run of the ball game with a wall scraper to left for home run number nine on the year for Haniger. A quick counter had the game tied up at 4-4.

Tied up headed into the bottom of the 4th, the legend of September Jarred Kelenic continued to grow. With Jesse Winker at first after a walk to start the inning, Kelenic drove one the other way that just kept carrying until it got over the wall for a two-run shot for the young Mariner. Kelenic’s sixth home run of the season had the Mariners back out in front 6-4.

Things settled down until the 6th. With both starters out of the ballgame, the Rangers brought in Brock Burke to try to keep the Texas deficit at two. He would be unsuccessful. Jarred Kelenic got a fastball up in the zone and joined Mitch Haniger in the multi-homer game club as he watched his seventh home run of the season leave the yard to extend the Seattle lead to 7-4. The Mariners became the second team to have two players with multi-homer games in the same game twice this season joining the New York Yankees. Julio Rodriguez and Eugenio Suarez did it against Atlanta back on September 11th.

All of the good vibes came to a screeching halt in the top of the 7th. Paul Sewald took over and it was one of his worst outings of the year. After striking out Josh H. Smith to start the inning, Marcus Semien would hit his second home run of the game and 26th of the season to make it 7-5. The next batter Nathaniel Lowe would close the gap further as he smacked his 26th home run of the season as well to make it 7-6. Paul Sewald would be pulled from the game with a runner on first and two outs. Andrés Muñoz would bail out his teammate by getting Mark Mathias to ground out to Ty France at first to end the inning with the Mariners still out in front.

That lead would vanish in the top of the 8th. Back-to-back singles by Bubba Thompson and Sam Huff had runners on the corners with nobody out. Muñoz would get Kevin Plawecki to hit into a 6-4-3 double play but Thompson would score and we were tied at 7-7.

The Mariners got a runner to second with two outs in the 9th but couldn’t drive him in so we were headed to extra innings. With a runner starting on second in the 10th, Erik Swanson would start the inning off right by striking out Josh Jung. Mariner killer Kole Calhoun would break the tie with a base hit to right to score Adolis Garcia from second to make it 8-7 Rangers. A walk was sandwiched between a pop out and a strikeout to keep it 8-7 going into the bottom of the 10th.

Jose Leclerc took over for Texas on the mound and the Mariners would pinch run Sam Haggerty for Ty France at second in a little bit of a surprising move. Eugenio Suarez lined a base hit to left but Haggerty would stop at third because he had to make sure the ball wasn’t caught before advancing. Mitch Haniger struck out for the first out to bring up Cal Raleigh. The Mariner catcher hit a looper into left center but Calhoun would make a diving catch to record the out, but Haggerty would tag and score to tie the game at 8-8. The Rangers tried to appeal that he left early, but didn’t execute the appeal right and Suarez snuck into second representing the winning run. Abraham Toro would pinch run for Suarez and Carlos Santana walked with two outs. Jarred Kelenic however would pop up to end the inning to send it to the 11th.

Chris Flexen would pitch the 11th for the Mariners with Leody Taveras starting at second. Taveras advanced to third on a sacrifice bunt by Josh H. Smith with one out. Marcus Semien continued playing small ball for Texas as he hit a fly ball to right field and Mitch Haniger’s throw would be offline to score Taveras to make it 9-8 going to the bottom of the 11th.

Jarred Kelenic started at second for the Mariners and he advanced to third after a Dylan Moore single to start the inning. The M’s were in a great position with Luis Torrens coming into pinch hit for Adam Frazier to avoid the lefty-on-lefty matchup against John King. Torrens once again came up with a big extra innings knock as he hit one the other way into right field to score Kelenic and tie the game at 9-9. With runners on first and second and nobody out, J.P. Crawford would come to the plate but things would get even easier for him. Dylan Moore would show off the Mariners aggression on the base paths and stole third for his 20th stolen base of the season. The winning run was just 90 feet away. Crawford slapped a rocket towards third and it would just go off the glove of Jung at third and Moore would score easily to win it in extras for the Mariners 10-9.

The Mariners (85-70) moved up the AL Wild Card standings thanks to the J.P. Crawford walk off single. Coupled with the Baltimore loss, the Mariners magic number to clinch a playoff spot is down to 1. Since Tampa Bay also lost, the Mariners move half of a game in front of the Rays for the second Wild Card spot. Toronto also lost to put Seattle just two games behind the Blue Jays for the top spot in the American League Wild Card race. The Orioles will take on the New York Yankees at 4:05 on Friday so the M’s could lock up a playoff spot in the first few innings of their game. If the Orioles win, the Mariners can clinch with a win in game one of a three-game series with the Oakland Athletics. First pitch will take place at 6:40pm when Logan Gilbert (13-6, 3.29 ERA) takes the mound for the M’s against Ken Waldichuk (1-2, 7.15 ERA) for Oakland.

It is happening! The long playoff drought that has been talked about for so long is about to be no more. One win. That is all it takes. You can see how badly these players want to do it in front of the home crowd and they deserve to do it right there. Everything lines up to end this thing on Friday night. September 30th, 2022 will be a historic day for Seattle. I personally want to see Baltimore win so the M’s can lock it up with a win of their own. These guys have worked tirelessly to put an end to this thing and give us fans a reason to celebrate. Be loud for them Mariner fans. These guys are doing it for this great franchise and the great fanbase surrounding them. One. More. Game.