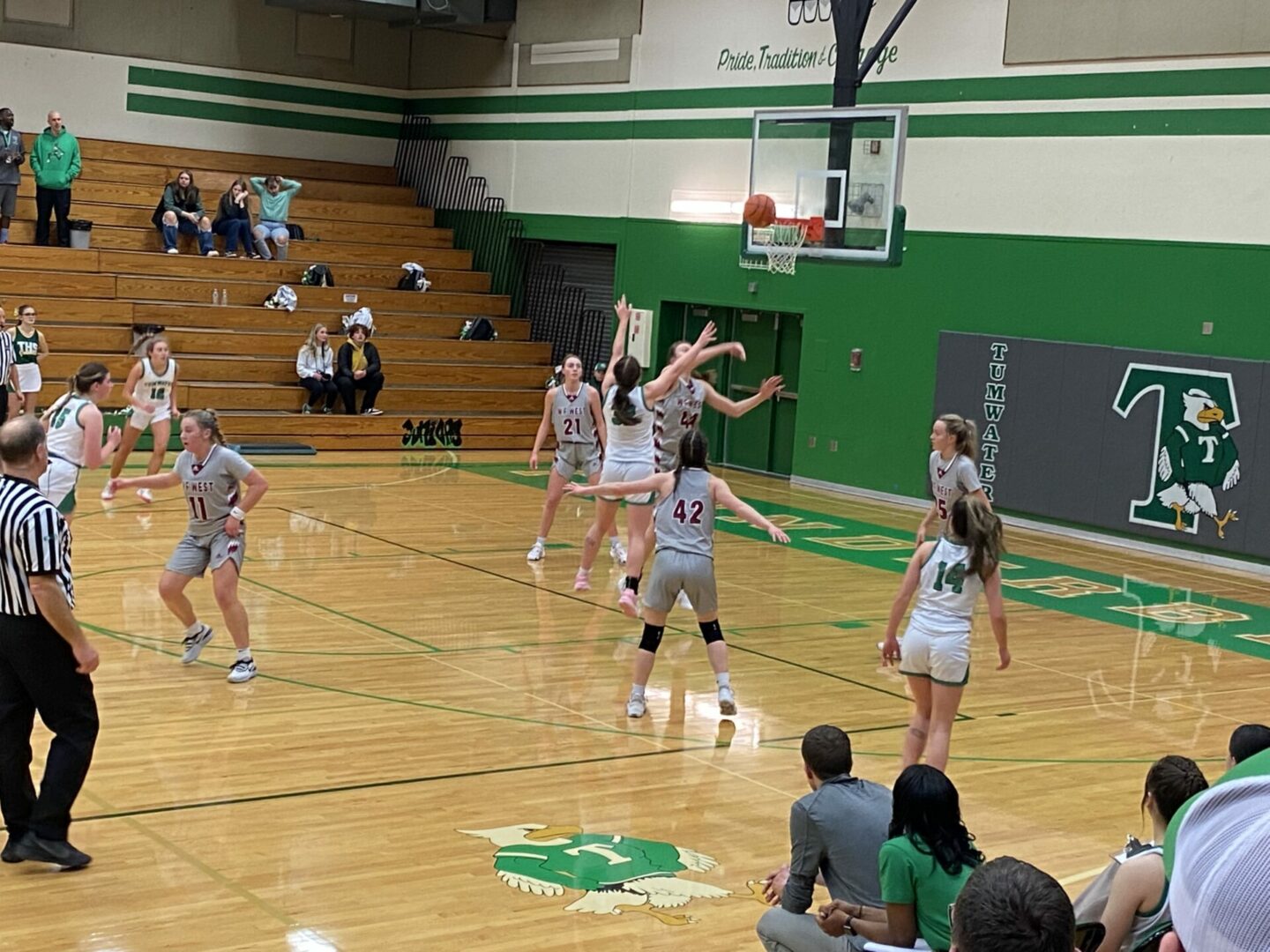 (Tumwater, WA) Since the 2018-19 season, it has been WF West and Tumwater atop the Evergreen 2A conference when it comes to girls basketball. This season has been no different which made Tuesday nights battle between the two juggernauts part one of a potential league championship battle.

Tumwater came into the game winning the previous four matchups with the Bearcats dating back to the Covid shortened 2021 spring season. With a lot of new faces on both teams, this felt like the beginning of a new era in this rivalry game. One familiar face from last season proved to be the difference make as Julia Dalan has stepped into a bigger role this season and dominated the paint to carry the Bearcats to a 53-37 victory.

Both teams had a bit of a scoring drought in the 1st quarter which wasn’t surprising since both teams pride themselves on solid defense. With Kylie Waltermeyer still out with a foot injury, Tumwater has been looking to find a go to scoring option but a cold shooting night made things much more difficult for the T-Birds. They didn’t have much success in the paint with Julia Dalan blocking anything in sight for the Bearcats.

On the offensive end for WF West, an early three for Lena Fragner and a couple of easy baskets for Julia Dalan, at least she made them look easy, built the Bearcats a 13-7 lead at the end of the opening quarter despite a lull in the offense in the middle of the quarter which was in larger part due to the aggressive Tumwater defense.

The 2nd quarter was more of the same and defense was the story. Regan Brewer provided the spark for Tumwater and forced many turnovers. The turnovers didn’t spark the offense however as the Bearcat zone defense just smothered Tumwater. Brewer who is Tumwater’s leading scorer, didn’t get her first bucket until late in the 2nd quarter. An injury to Carlie Deskins in the 2nd quarter kept her out for the remainder of the game which was a massive loss to WF West. Despite that, the Bearcats took a 24-13 lead into the halftime break.

The 2nd half was an entire different story as both offenses woke up. The scoring was spread out for WF West as Lena Fragner and Julia Dalan continued their solid game while Amanda Bennett and Grace Simpson stepped up on offense as well. Tumwater still struggled shooting for the most part but a Sydney Sumrock three sparked the T-Birds. Kendall Gjurasic started heating up and Regan Brewer got her offense going as well. Tumwater matched their scoring output for the first half in the 3rd quarter alone but WF West still had a 36-26 lead going into the 4th.

Tumwater was able to cut their deficit down to single digits but a couple of big three pointers by Fragner and Bennett snuffed out the Tumwater rally. The T-Birds brought in their subs to foul at the midway point of the 4th quarter to put the Bearcats in the bonus. WF West would sink their free throws and Tumwater once again couldn’t get shots to fall which allowed WF West to pull away and finish off a 53-37 win.

Our Thorbeckes MVP was Julia Dalan for WF West. The 6’3 sophomore finished with a game high 18 points and 12 blocks and 9 rebounds to just fall short of another triple double. Dalan continues to just be a dominant force on both ends of the court. The sophomore continue to just get better and better which is just scary since she still has two and half years to improve.

The win moves WF West to 11-2 overall and 6-0 in league play. They will return to action on Thursday when they host Rochester before hosting Montesano on Friday on a game you can catch on ESN. Tumwater drops to 9-4 and 5-1 in league play as the T-Birds continue to work to get healthy. They will travel to Shelton on Thursday in a rematch of an overtime thriller from earlier in the season.