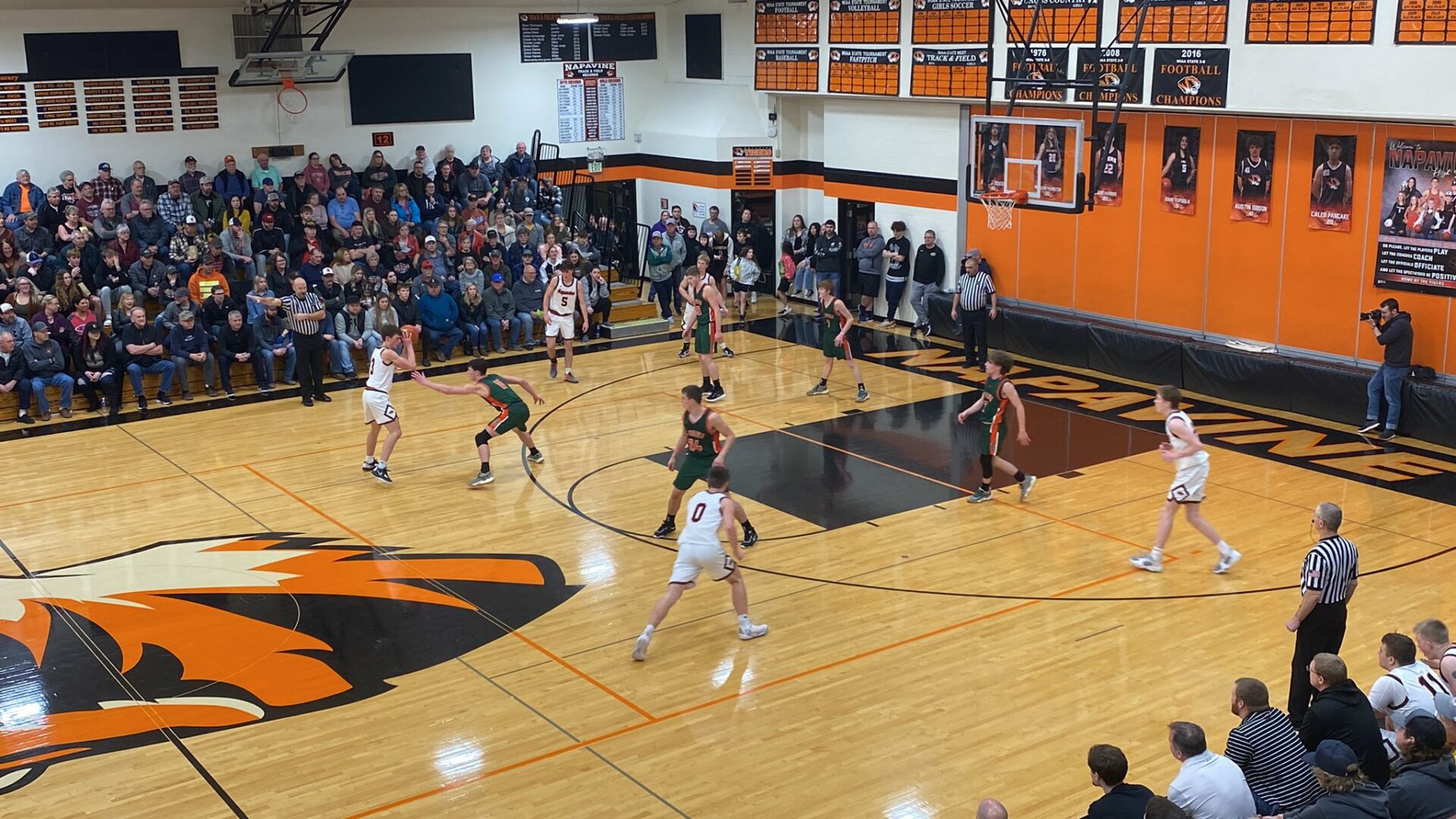 (Napavine, WA) Electric doesn’t begin to describe the environment in the Napavine gymnasium on Wednesday night as the Napavine Tigers and Morton/White Pass Timberwolves warmed up to a pivotal matchup in the C2BL. Both teams came into the matchup ranked in the top 10 in the latest AP poll with MWP at #3 and Napavine at #8. Whatever the outcome of the game may be, it would shake up the entire top 10 rankings.

MWP was riding high coming into the game after winning four consecutive games to open up 2023. Meanwhile Napavine was coming off a loss to a red hot Toutle Lake squad. When the final horn sounded, it would be Napavine trying to start a winning streak while MWP would have to find a way to bounce back as the Tigers held off the T-Wolves in a game that lived up to the hype.

The 1st quarter was a sprint from the opening tip. There wasn’t a feeling out process for either side on offense as both put up strong quarters. There was some early foul trouble for both sides as Napavine’s leading scorer James Grose and MWP’s big man Josh Salguero each picked up two fouls very early in the game. One of if not the best defender in the C2BL in Cael Stanley for Napavine also picked up two opening quarter fouls.

Karsen Denault stepped up in a big way for the Tigers. The 6’4 sophomore became a starter with Keith Olson graduating last year and with the brightest lights of the season, Denault had the best performance of his young career. Denault had 8 points in the first quarter and showed no fear attacking Salguero in the paint. After a fast paced opening quarter, Napavine had a 20-16 lead.

MWP made a change defensively in the 2nd quarter and it paid off in a big way. The T-Wolves went to a 1-3-1 zone and it threw Napavine for a loop. The Tigers would only score 8 points in the entire 2nd quarter which gave MWP a window to try to seize the lead and the momentum. They would do just that. Jake Cournyer would get the perimeter game going while Josh Salguero took over in the paint. Napavine turnovers led to fastbreak opportunities the other way for the Timberwolves and they capitalized on those opportunities. At halftime, MWP had taken the lead 35-28 by outscoring Napavine in the 2nd quarter 19-8.

The 3rd quarter saw big trouble for MWP. Josh Salguero quickly picked up two fouls to put him at four for the game and on the bench for most of the 3rd quarter. A lot of credit was due to Napavine coach Rex Stanley who figured out how to attack the MWP 1-3-1. Denault would cut from the corner to the basket and it worked consistently for the Tigers. With Salguero out, Napavine had a bigger passing lane and Stanley and Grose kept threading the needle.

Late in the 3rd quarter, a massive play was made by an unlikely player for Napavine. MWP drove to the basket and Brody Landram would make a great play to strip the ball and made a fantastic pass to Grose who would hit a baseline jumper. That play changed the momentum and swung it in Napavine’s favor despite MWP having a lead after three quarters 44-43.

Every single person in that gym, which was extremely full, was on the edge of their seat for the final 8 minutes of the game. It was up for grabs and the teams went back and forth in the final quarter. Josh Salguero was back in and played smart basketball to avoid fouling out while still dominating the boards and on offense. Judah Kelly also added some big buckets and great defense for MWP. James Grose and Karsen Denault continued to be the offense for Napavine but Jarin Prather hit a couple of big shots in the 2nd half as well.

Salguero would get an offensive rebound and get the putback to tie the game with the shot clock turned off. After a Napavine timeout, they would get the ball to their leader in James Grose who once again showed off how good of a shooter he is with a picture perfect pull up fadeaway jumper to give Napavine a two point lead with 2.8 seconds left.

MWP would design a play that saw Carter Dantinne launch the ball down court where it was knocked out of play by Napavine. With 2.1 on the clock, Chad Cramer drew up a play from the sideline. Hunter Hazen lobbed the ball into the paint to Salguero who put up a good looking shot. However, the ball trickled off the rim as the final buzzer sounded to give Napavine a hard fought 61-59 win in one of the best games of the year.

Our Thorbeckes MVP of the game was Karsen Denault who had the best game of his career and showed what this team has the potential to be. He scored 22 points to go along with his 8 rebounds to close the game very strong for Napavine. While he is a different player than Olson was, he showed that he can be just as effective just in a different way.