GSHL 2A Not ready to give up Soccer Dominance over Evco, SWEEP all 4 matches! 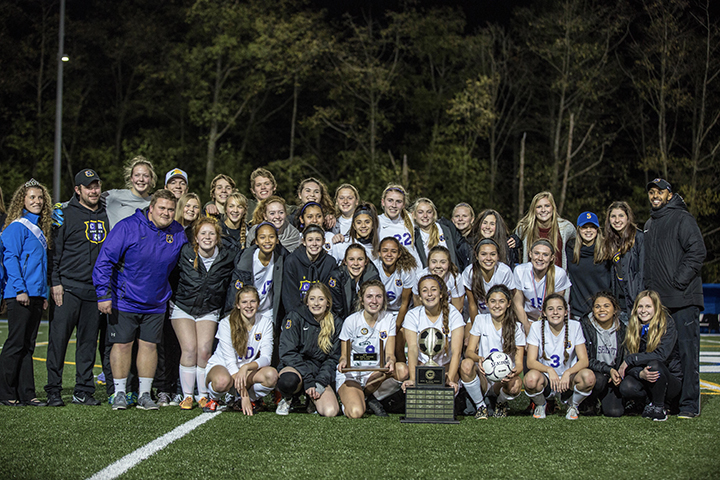 No shortage of surprises on Saturday in the opening round of the Dist 4 Girls Soccer Tournament other than the GSHL is still really, REALLY good! Both top seeds the GSHL’s Columbia River and the Evco’s Black Hills showed vulnerability and they could be beat with GSHL 5th seed Mark Morris tying up the Chieftains holding the match scoreless through the first 40 minutes. CR was then the benefactor of a 2nd half penalty kick and Yaneisy Rodriguez knocked it in for the only goal of the match and held on for the 1-0 win over the up and coming Monarchs.

Black Hills was not as fortunate and after their run through the Evco 2A where they outscored their opponents 58-4 they could not find the winning touch on their home field against the Lumberjills. Sadie Allen got the Jills on the board in the 30th minute giving them a 1-0 halftime lead. The Wolves tied it just after the break on a Sydney Lowe goal but the high powered Wolves offense would get shut down after that. RAL would get the game winner off the foot of Maddie Wolff and the Jills handed Black Hills a stunning gut punch with the road win.

Hockinson blanked WF West but the Bearcats showed some fight in this one and the fast improving squad showed they belonged in the tournament. The desire and effort was their but not enough to defeat the Hawks who took the lead on a Megan Meindersee goal and cemented the win with an unassisted shot from Brooke Grosz.

And in the opener of the day it was Ridgefield getting past Tumwater but the T-Birds were MORE than gracious hosts. ESN’s Dave Weber was there and has the story:

(Tumwater, WA)  Third-seeded Ridgefield disrupted host Tumwater’s speed defensively to defeat the second-seeded Thunderbirds, 2-1, in a first round District 4 2A girls soccer game Saturday.
Ridgefield, which outshot Tumwater, 15-7, on the day, broke through in the 12th minute to score on a 18-yard blast into the upper right corner of the net by Annika Farley.
The T-Birds, held in check much of the game, connected on one of their favorite combinations — Hallie Bergford playing the ball ahead to fleet Cassity Colard — to score in the 38th minute.
Ridgefield broke the tie in the 54th minute when Anita Carlson’s crossing pass from
left wing ricocheted off a Tumwater defender in front of the net for an own goal.
The T-Birds got an even tougher break as time was about to expire when all-league goalkeeper Cassie Mullen injured a knee, putting in doubt her chances to be in the lineup Tuesday.  Freshman Jaiden Christian replaced her.
Senior sweeper Hailey Harris was named the Pacific Sports Spas player of the game for Ridgefield after her sideline to sideline defense frustrated Tumwater throughout.  Colard earned the honor for Tumwater.  Annika Farley’s goal, which gave the Spudders a lead they lost only for a 16-minute stretch when the game was tied, earned ProActive Physical Therapy Play of the Game.

Round 2 is set for Halloween on Tuesday with the Winner’s Bracket featuring Ridgefield at Columbia River and RA Long at Hockinson with both games Winner to State and losers drop into the consolation bracket. Both matches set for 7p.

The other 2 matches are loser out and will be played at Tumwater District Stadium though times are still to be announced. Mark Morris faces Tumwater and WF West at Black Hills. There is only 1 play-off spot available to the 6 teams that eventually end up in the consolation bracket.