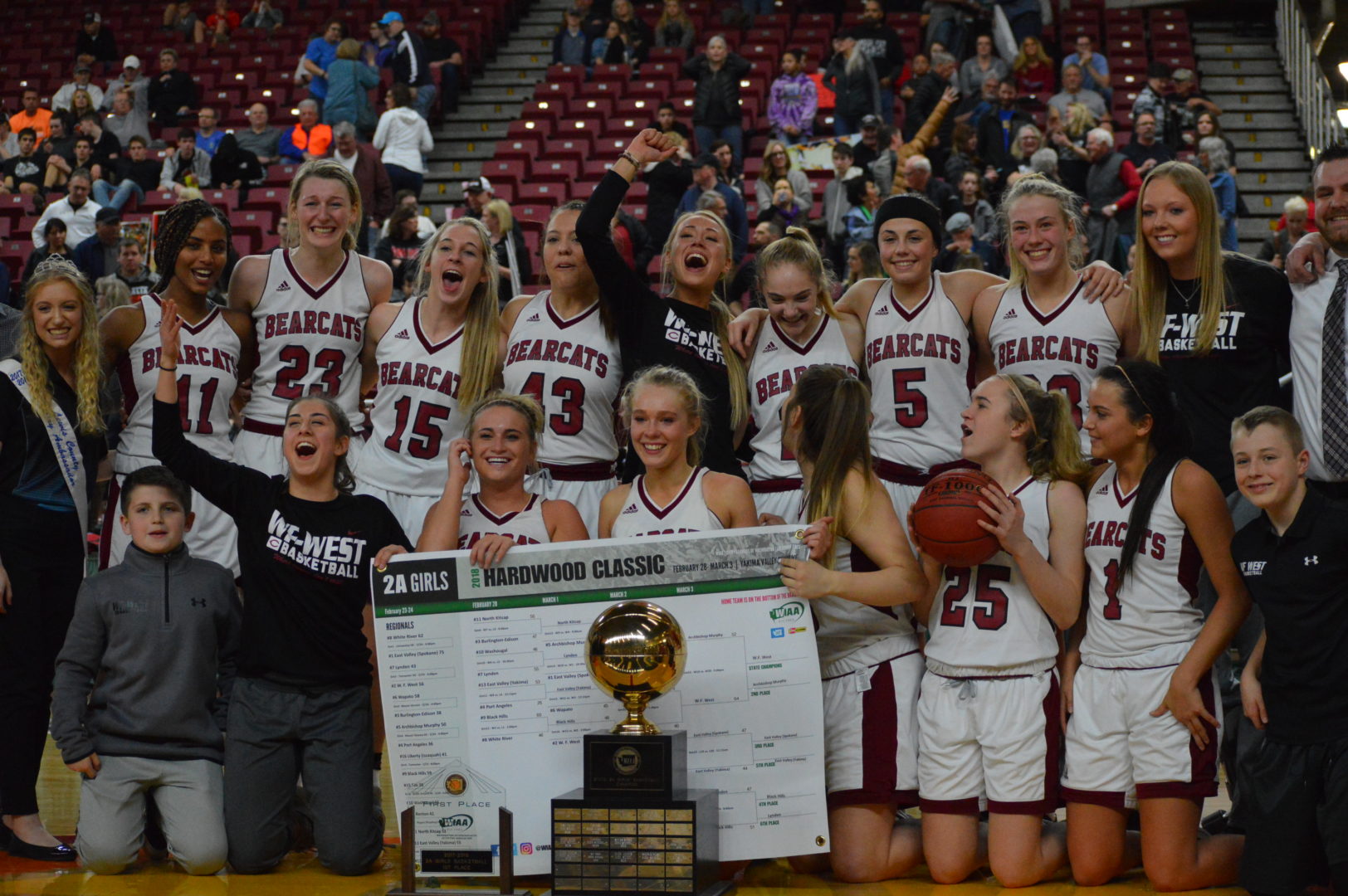 ESN Girls 2A All-Tournament Co-MVP Julia Johnson scored 18 points and grabbed 7 rebounds while her counterpart Kiara Steen added 14 as the Bearcats roared from 15 points down to win their second championship in the past five years.  Erika Brumfield, a second team All-Tournament choice, tallied 16.

Genesis Wilkinson, who tallied a team-high 12 points, scored with 17 seconds to go to life the Knights past the Devils in a battle of teams with the identical school name.  Faith Adams added 10 points for the winners.

Ashlynn Sylve had a game-high 15 points for the Devils, while Kalli Willett and Alyssa Valdez each added 12.

Read more about the game in the  Spokane Spokesman-Review and the Yakima Herald-Republic.

Keylie Hershey’s 18 points led the Lions, who also got 11 from Livia Tjoelker. Read more about the game in The Olympian and the Lynden Tribune

Julia Lucas posted an impressive 20-point, 12-rebound performance as the Wildcats moved on to the finals.  Maddie Hill added 13 and Emily Rodabaugh 10.

Bearcat sophomore Taya McCallum tied the game at 38-38 with her only field of the day, a 3-pointer, and Julia Johnson scored the game winner as W.F. West erased a 9-point second-half deficit.  Erika Brumfield lead the Bearcats with 12 points and 9 rebounds while Johnson had 10 points.

Ashlynn Sylve paced the Devils with 15 points and 8 rebounds.  Alyssa Valdez contributed 9 points while Natalie Andreas had 7 points and 9 rebounds.

Keylie Hershey led the way with 11 for the Lions who move into the 4th/6th place against Black Hills on Saturday at 8 a.m.  Olivia Selembo tallied 15 points for the Vikings, who are eliminated.

Read more about the game in the Kitsap Sun

Maisy Williams scored 14 of her 17 points in the second half as the Wolves moved into the 4th/6th match-up with Lynden at 8 a.m. Saturday.  Janealle Sutterlict scored a game-high 18 for the other Wolves, while Chehalis Aleck added 11.

Archbishop Murphy moves on to play East Valley of Spokane in a semi-final matchup on Friday at 3:45 p.m.  North Kitsap drops into the 4th/6th bracket and meets Lynden in a loser-out game at 9 a.m. Friday.

The Knights held Lynden to 15.8 percent shooting in the second half to insure the Lions would not repeat as 2A champions.  Grace Wilkinson, who also had 2 assists and 3 blocked shots, lead East Valley with 16 points.  Faith Adams contributed 13 points while Brie Holecek tallied 10 points and dished out 4 assists.

Lynden had balanced, if low, scoring as both Ruby VanderHaak and Alexis Holman had nine and Livia Tjoelker 8.

East Valley meets Archbishop Murphy in a 3:45 p.m. semi-final on Friday while Lynden drops into the 4th/6th bracket where it will face North Kitsap in a loser-out game Friday at 9 a.m.

Lindsey Nurmi led the Wolves with 15 points while Megan River added 11.  Black Hills moved on to a 10:30 a.m. consolation game with Wapato on Friday.

The Vikings overcame an early Burlington-Edison lead and outshot the Tigers, 49%-28%, and will move on to play Archbishop Murphy in a 9 a.m. quarterfinal on Thursday.  Burlington-Edison, last season’s runner-up, is out.

The Panthers led 13-8 after a quarter, but the Lions turned the tables with a 19-6 second period and held on to advance to a 10:30 a.m. quarterfinal Thursday against East Valley of Spokane.  Washougal is out.

Keylie Hershey led all scorers with 18 points thanks to 11-of-12 shooting at the foul line while Livia Tjoelker added 12 and Faith Baar 10 for Lynden.  Beyonce Bea topped Washougal, which played only six players, with 15.

Port Angeles was never in the game, falling behind 20-2 after a quarter and wound up eliminated from the tournament while East Valley moves on to meet defending champion Lynden in a 10:30 a.m. quarterfinal Thursday morning.

Ashlynn Sylve paced the Red Devils with 17 points while Delan Owens had 10.  East Valley played 11 girls and nine scored.  Gracie Long had a team-high eight points for the Roughriders to go with 7 points, 6 rebounds and 2 assists from Madison Cooke.

Read more about the game in the Yakima Herald-Republic

Senior point guard Lindsey Nurmi scored a game-high 18 points as the Wolves jumped out to a 9-1 lead early and were never in serious trouble.  Black Hills faces a fourth attempt at defeating Evergreen Conference rival W.F. West in a 2 p.m. quarterfinal tomorrow.  The Hornets are out.