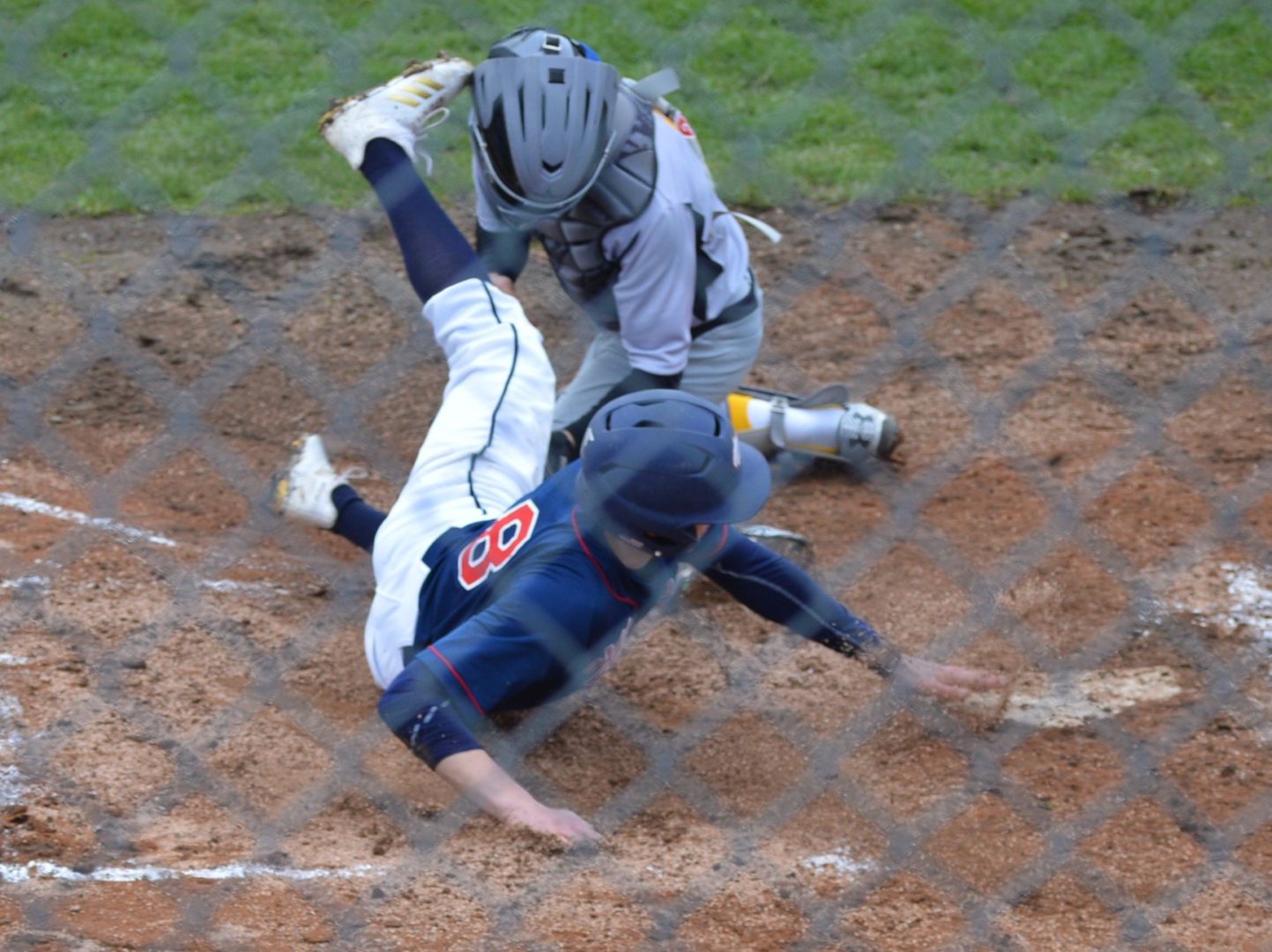 (Tumwater, WA) On a cold and wet afternoon it was surprising the Black Hills baseball field was playable but somehow most of the rain and hail and wet snow missed the back yard at BHHS and it was not a wasted trip for the Fife Trojans.

Bryce Kincy got things started belting a lead-off double and that was followed by a walk to Taylor Simmons from Fife starting pitcher Eli Graham. Ethan Loveless then ripped one into deep center scoring both runners with a stand-up double but here is where the first choice backfired as Loveless tried to stretch it into a triple and was thrown out at 3rd. Ethan’s brother Zach Loveless followed and unloaded a shot into the right center gap which easily would have scored Ethan had he been safe or stayed at 2nd.

After a strike-out for the 2nd out, a walk to Sam Flasig and pinch runner Dustyn Dalebout taking 3rd that left runners on the corners with 2 out. During Cole Burney’s at bat the next choice ended the inning when Flasig took off slowly to 2nd drawing the throw from Fife catcher Trevor McCorkle. At the same time Dalebout headed for home but Fife read the play from the start and the throw was short top 2nd baseman David Bedell who gunned the ball back to McCorkle who tagged Dalebout for the easy play at home ending inning.

Fife would get a run back in the top of the 2nd with a 2-out rally including 2 infield hits followed by 2 hits to the outfield but the Trojans could only get 1 despite the 4 straight hits making it 2-1, McCorkle drove in the run.

It would stay that way until the top of the 5th when the Trojans would get to Nelson. McCorkle led off with a basehit followed by a double from Jordan Anderson and then Bedell was hit by a pitch loading the bases with no outs. Eli Graham then stepped up with a chance to help his own cause and boy did he with a bases clearing stand-up double to give Fife a 4-2 lead. Graham would score on a wild pitch and that would do it for Nelson who was replaced by Taylor Simmons who got the Wolves out of the inning but now down 5-2.

The Trojans added 2 more in the top of the 6th when Jake Lewis led off with a single, McCorkle then sac bunted him to 2nd. Anderson then sharply singled holding Lewis to 3rd and then Judah Graham who had struck out 3 times redeemed himself big time with a towering double clearing the bases giving the Trojans 2 insurance runs they didn’t know at the time they needed going up 7-2.

The Wolves made a run in the bottom half of the 6th as Ethan Loveless led off with a walk and then scored when Zach Loveless belted his 2nd double of the game. Dalebout came in to run for Zach  and scored on a crazy strike out play. Jordan Anderson had come in to relieve Eli Graham by this time and the strikeout pitch was low and hit the ground so Nelson took off for 1st. McCorkle had the ball but simply overthrew Eli Graham now at 1st into right field. This scored Dalebout from 2nd and another overthrow pushed Nelson to 3rd. Nelson then scored on an error that put Andrew Wilmoth on 1st but that would be the end of the rally and the Wolves were back in the game down 7-5.

However the 7th inning was pretty uneventful for both closers as Kaden Wright came on for Black Hills and gave up a 2 out double to Lewis but quickly got out of the inning. Jaren Larson then came in for Fife looking to clinch their 6th win of the year already and did so with 2 strikeouts, a walk and a fly-out. Fife improves to 6-1 and Black Hills falls to 2-2.

Our Pacific Sports Spa Players of the Game went to Fife’s Eli Graham and Black Hills’ Andrew Wilmoth. The Thorebeckes Sportsmanship Award goes to Jake Lewis of the Trojans. Lewis had an incredible game and he wasn’t even supposed to start. A late scratch with a player with a stiff back and then the next player up was unavailable too so Fife Coach Shane Nixon turned to Lewis to play left field. He rewarded Nixon and maybe crept up the depth chart going 3-4 with a double and catching the only fly ball sent his way. A great game from someone who likely didn’t even know if he would get a chance to play. This is a classic example of next man up.

Both teams return to action next week and both are back into league play.