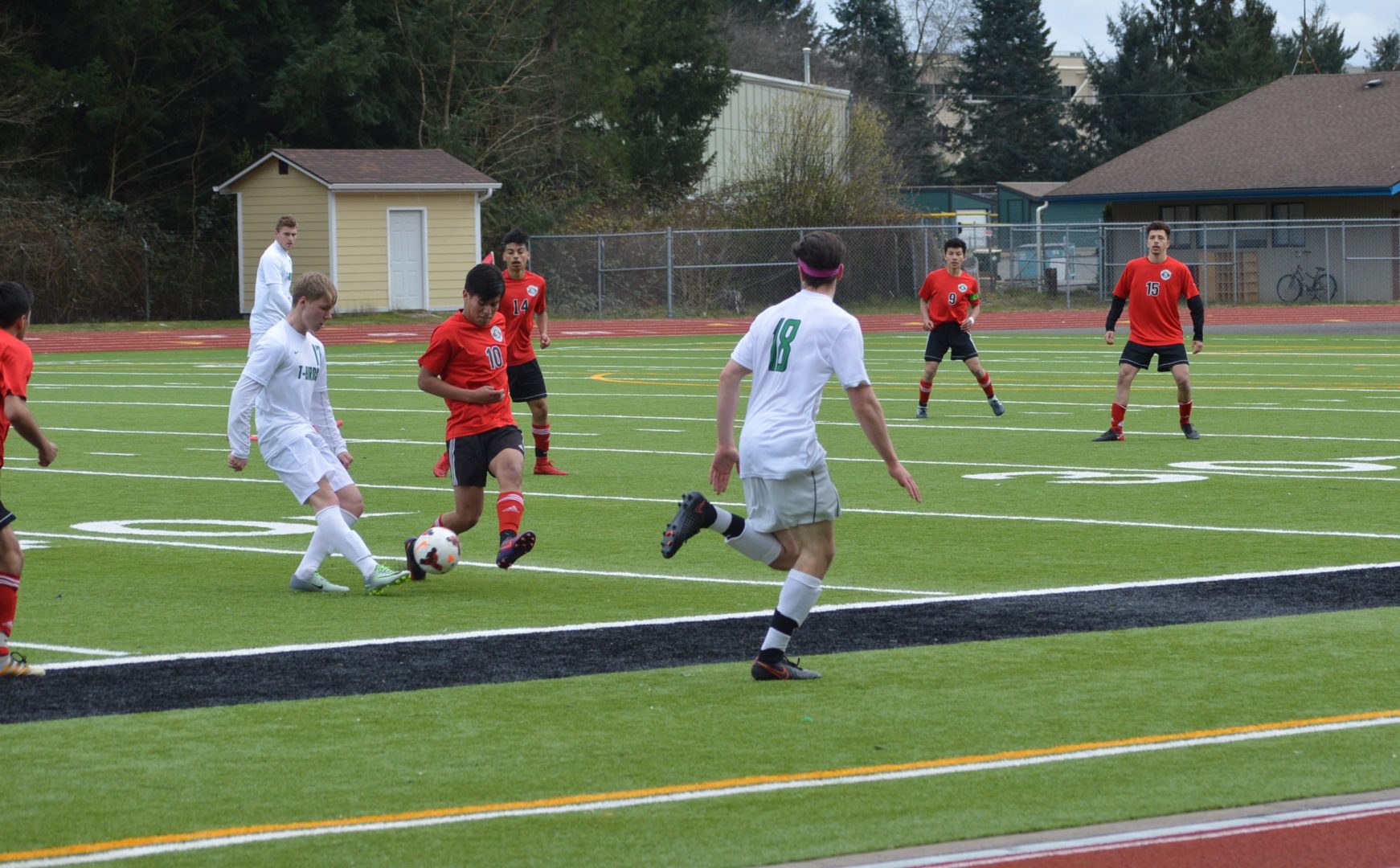 (Tumwater, WA) Shelton and Tumwater showed down Saturday and it was the T-Birds Kicks for Cancer annual event where admission was by donation and all concessions and other items for sale are donated to cancer research. Tumwater Head Coach Brett Bartlett says the event is a great reminder to kids that there are always bigger and more important things in life and keeps things like sports in perspective.

The T-Birds ended up being more than gracious hosts as they not only scored their goal after the Highclimbers in the 56th minute they scored the Shelton goal for them in the 50th! Let’s start with the scoreless 1st half though where it was Shelton controlling the pace of the game. The Highclimbers put several runs together combined 5 corner kicks Tumwater’s keeper Britton Fine was busy with his backline which was depleted as several starters were not available today due to previous commitments to visit college campuses.

Fine combined with Keegan Fields, Jack Armour and Cole Wise blanked the Highclimbers for 80 minutes in a terrific defensive performance. Shelton did have several solid chances to score with the closest being a corner kick from Alex Vasquez who lofted one into the middle of the box and Alex Lopez headed it to the right of Fine but hit the post and it bounced out in front and Fine smothered it.

After the break it was Tumwater who came out firing forcing the pressure and had several scoring chances. Shelton did counter and penetrated deep into T-Bird territory and a kick back in front of the goal which ricocheted off the defender and into the net for the 1-0 lead.

The T-Birds answered their own mistake just 6 minutes later on a gorgeous shot from Jamin Schultz from about 35 yards out. Schultz fired away at Shelton keeper Caleb Batista who clearly though the ball was long when it dropped just in front of the crossbar for the equalizer.

The 2 teams then battled the rest of the match in a stalemate and since it was a  non-league game they did not play OT or go to penalty kicks. Shelton is now 1-3-1 while Tumwater is 2-0-3. Our Pacific Sports Spa Players of the Game went to Shelton’s Jon Alonzo and Tumwater’s Britton Fine. Our Thorebeckes Sportsmanship Awards went to the Highclimbers’ Caleb Batista and the T-Birds’ Jamin Schultz.