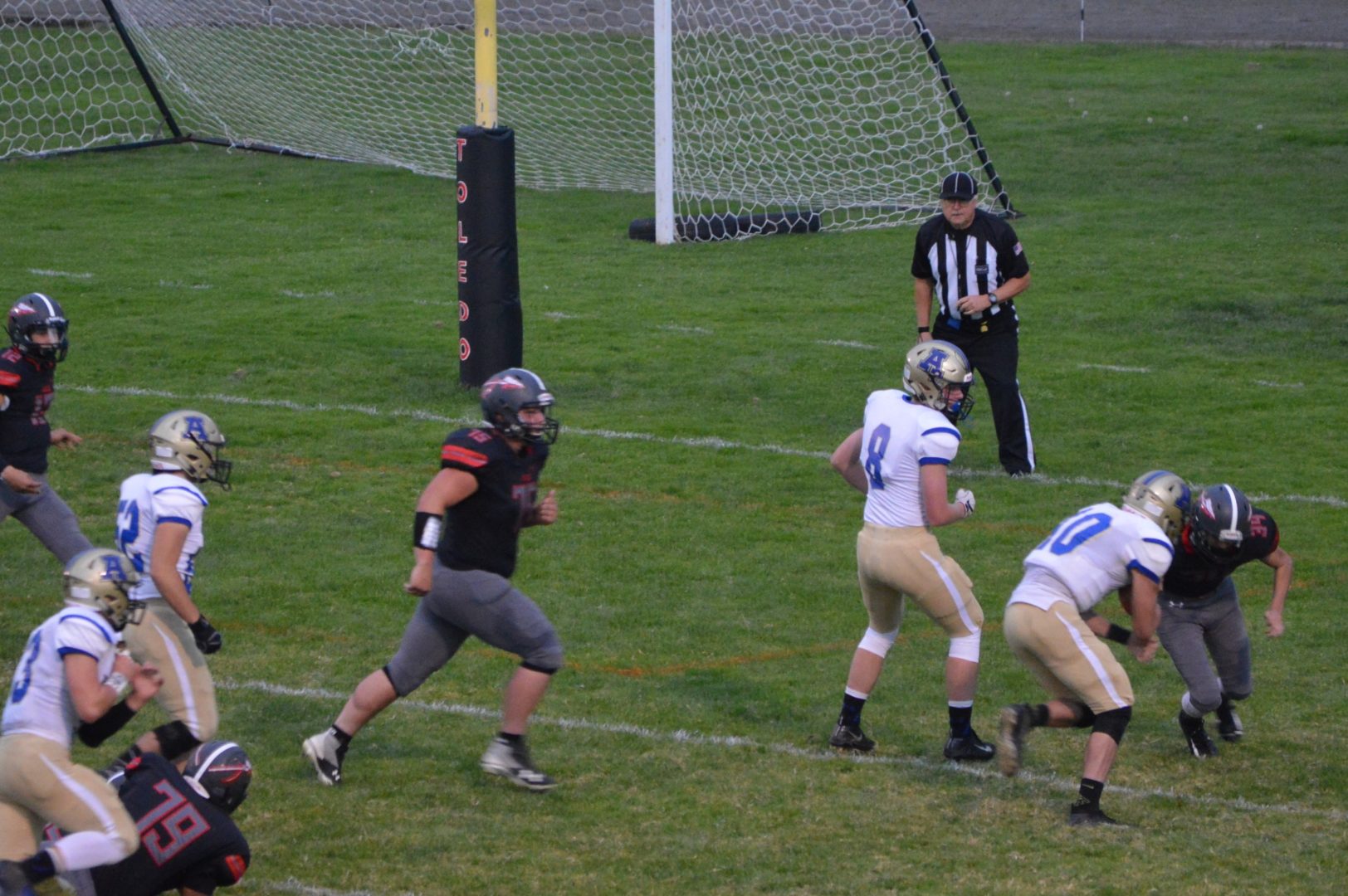 (Toledo, WA) The Pirates came in as the #1 ranked 2B team in the State and in the 1st 5 minutes looked like they were going to run away and hide from their hosts, the Toledo Indians. It took 1 minute for the Pirates to score the first TD, QB Braden Thomas set it up with a long 40-yard pass completion to Brady Collins and then ran it in from the 11-yard line, Mitch Maynard added the PAT and it was 7-0.

After a quick 3 and out, Thomas ran in his 2nd TD this time from the 5 and on 4th down. The Bucs extended that lead to 14-0. Then they hit a brick wall, maybe they thought the rest of the game was going to be this easy combined with Toledo settling down.

The game ended up being a game of runs with Adna striking first followed by 15 unanswered points for the Indians beginning in the 2nd quarter when Duke Schaplow plowed in from the one. The drive began on their own 29 and gave the Indians momentum into the half trailing 14-6.

On Toledo’s 1st drive of the 2nd half they moved the ball well down the field but stalled and settled for a 37-yard field goal from Andreas Malunat to make it 14-9. Adna then had the ball deep in their own side of the field and faced a 4th and 10 from their 10 when they tried to fake punt and gave the ball right back to Toledo with a 1st and goal. Indians QB Bryce Marcil took 1 play to hit Fano Arceo-Hansen for the go-ahead score. The 2 point try failed but Toledo led 15-14 with 1:02 to play in the 3rd.

The final streak came from Adna who rallied to score on the following drive going 60-yards and capped off with a 2-yard blast from Chance Fay. After holding Toledo to a 3 and out it was Cole Fay’s turn to shine as he sprinted 57-yards over the middle of the field to push the Adna lead to 27-15. Cole Fay then sealed the win with 4:50 to play when he picked off Marcil and ran it back 39-yards for a pick 6.

Adna improves to 4-0 while Toledo drops to 1-3. Our ESN Players of the Game went to Adna’s Cole Fay and Toledo’s Hunter Eatin.

(Napavine, WA) The Napavine Tigers blew open a tight contest scoring 3 straight touchdowns in the 2nd half after leading 19-14 at the break. The Tigers scored first on a Dawson Stanley pass to Laythan Demarest from just inside the 15, Demarest booted the PAT to make it 7-0.

The Mules scored when James Anderson blasted in from the 2 and Lucas Brown tied the game with the PAT. Stanley then gave the Tigers the lead for good when he ran in scores from the 2 and 13, both times the PAT failed to take a 19-7 lead. Wahkiakum stayed close on a beautiful 85-yard pass, catch and run play from Brown to Quentin Nelson and they went to the break with Napavine up by 5.

The Tigers added 2 more short yardage touchdown runs in the 3rd from Stanley and Demarest and then in the 4th quarter Draven Riddle sprinted in from the 10 to make it 39-14. Wahkiakum finished the scoring when Gabe Moon surged in from inside the 2 for the final score.

Napavine improves to 3-1 while Wahkiakum falls to 1-3. Our ESN Players of the Game went to Napavine’s Dawson Stanley and Wahkiakum’s Quentin Nelson.

(Washougal, WA)  The Panthers sent a notice they were ready to to battle in the now suddenly tough GSHL 2A league, home to the #1 ranked and unbeaten defending state Champion Hockinson Hawks with a win over the always strong WF West Bearcats.

The Bearcats struck first with a touchdown in the 1st quarter on a Leandre Gaines 12-yard run, with the PAT it was 7-0. Washougal rallied with 2 scores in the 2nd quarter to take a 13-7 advantage to the half. Brevan Bea ran in the first touchdown from the 3 and that was followed by a QB sneak from Dalton Payne.

Payne then connected on a 75-yard strike to Jakob Payne. The long play put the pressure on the Bearcats to respond going up 20-7. Chehalis did respond with a big run from Max Taylor a 54-yard run to close the gap back to 6 down 20-14 but then the Panthers put the game away with strong defense and a 22-yard Peter Boylen field goal to lead 23-14 after 3 and added the final score in the 4th quarter when Payne hit Aiden Kestner on a 24-yard TD Pass.

Washougal improves to 2-2 while WF West falls to 2-2. Our ESN Players of the Game went to the Panther’s Dalton Payne and the Bearcat’s Max Taylor.

(Tumwater, WA) The Celtics from the south were of little challenge to the powerful T-Birds as they cruised to their 4th win of the year. Tumwater used a pair of Dylans and 200+ rushers to dominate the offensive side of the ball and another stiff defensive performance to put this game away early.

The T-Birds Dylan Paine opened the scoring with a 90-yard run on the 2nd play from scrimmage and the tone was set. Dylan Loftis, not to be outdone, then scored from 64 and 18 and quickly it was 22-0.

McNary would interrupt the scoring outburst with a 14-yard pass play from Erik Barker to Nigel Harris but then before the half the T-Birds rolled up another  21 points on a 52-yard scamper from Paine and then touchdown runs from Loftis of 93 and 2 yards and at the break it was 43-6.

Tumwater got 2nd half touchdowns from Paine and Hunter Baker while the Celtics scored last on a 2-yard plunge by Junior Walling. Tumwater is now 4-0 and our ESN Players of the Game went to the T-Birds Dylan Loftis and the Celtics Erik Barker.