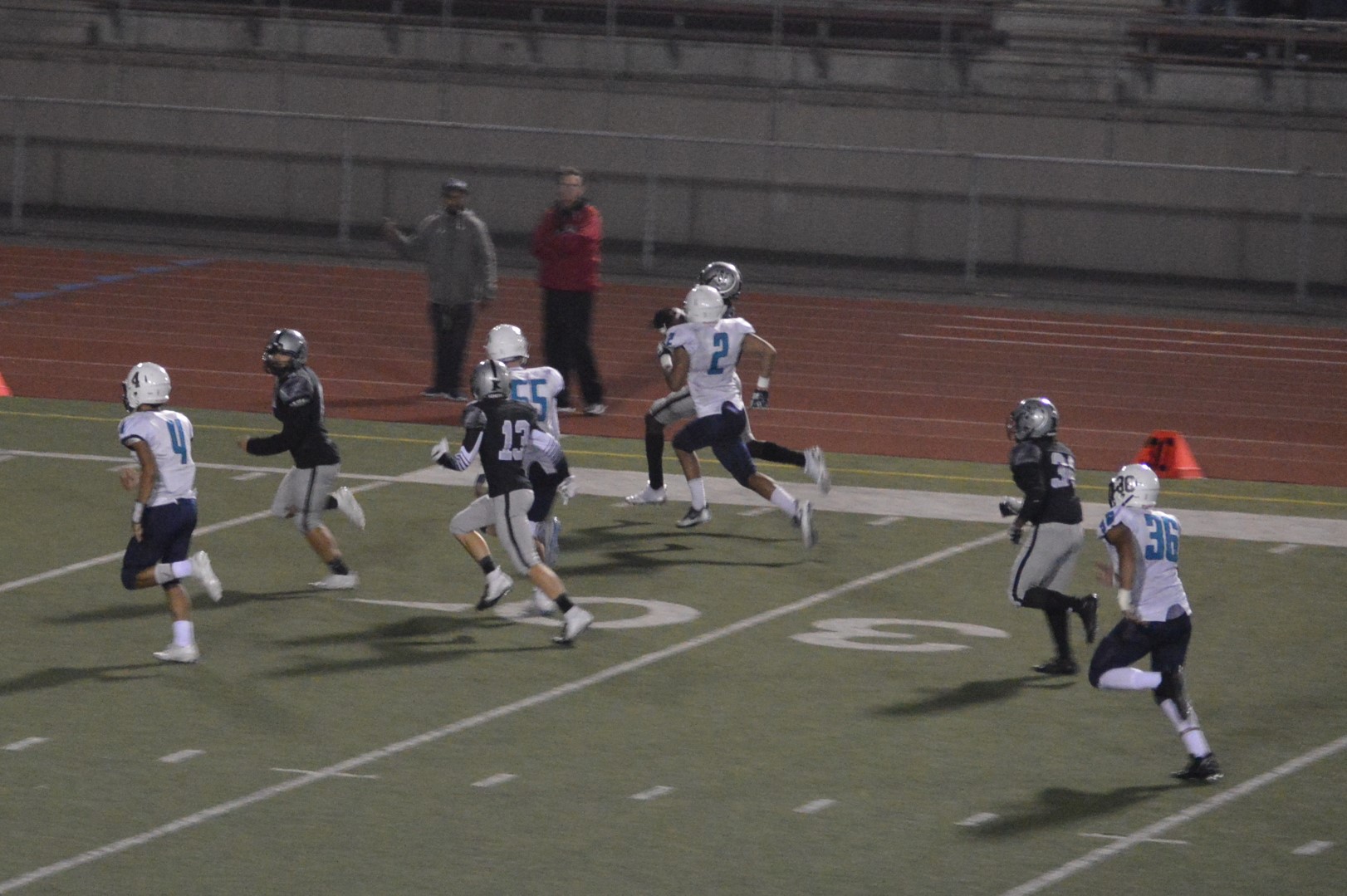 (Kent, WA) The Kentwood Conks and Auburn-Riverside Ravens came in with vastly different record, the Ravens were 3-1 and the Conks 0-4 but both were just 0-1 in NPSL Conference play so a win for Kentwood would put them back in the race while the loser would be in a big hole at 0-2 with 3 games to play. So there was plenty on the line in this game and at the flip of the coin you could tell Kentwood was going to go about their business in a different way as they won the toss and decided to receive the kick instead of deferring.

Kentwood did move the ball on a 7 play drive but then stalled on a big sack and they had to punt it away. The punt was deep and Auburn-Riverside began on their own 15 and they also moved the ball near midfield but had to punt it back. That set up a flurry of scoring that was 20 points in 1:19. On the 2nd play of their 2nd drive Gabriel Johnson busted loose for a 54-yard run into the endzone for the score, Kevin Oywak added the PAT and it was 7-0.

The Ravens wasted little time in answering when Javon Forward drove through the middle of the pack for a 34-yard run to the 29. Jayden Solis finished it off with a 29-yard burst but the PAT dinged off the right upright so the Conks held a 7-6 lead. It took 1:03 for them to score. It took 14-seconds for Kentwood to extend their lead when Dylan Daniels took the kick-off from their own 15 headed up field and broke to his left and saw nothing but green and went the distance and went up 14-6.

After an exchange of punts the Ravens took advantage of great field position and scored on a 20-yard run by Javon Forward to pull within 1 at 14-13. It looked like that is where the game would be at the half with Kentwood on the 35 of A-R with just 5 seconds to play in the half.  But QB Jalin Church had other ideas as he dropped back and had lots of time with great protection from his line and let fly with a ball over the top to Alphonse Oywak who got behind defenders and brought it in just in front of the back line of the endzone. This was a huge momentum swing and gave the Conks a huge charge heading into the break with a 21-13 lead.

A-R sent a message with their 1st drive when Javon Forward broke free for a 73-yard touchdown run on the 1st play of the 2nd half, the Ravens went for 2 but failed but trailed only 21-19. Kentwood answered on a great little screen play in the flat where Daniels caught the ball near the line of scrimmage at their own 48 got a great block from Allen Reonal that sprung Daniels 52 yards for the touchdown and Kentwood went back up 28-19.

After an A-R fumble Kentwood’s Frederick Rodgers III recovered on their own 34. Kentwood behind the running of Gabe Johnson marched down the field to the 3 where Lole Tapasa pounded it for the score to extend their lead to 35-19. During this time the Ravens also suffered a huge blow when Javon Forward hurt his ankle and was out for the rest of the game. He had 17 carries for 192 yards and only had the 1 run of 73 for a TD in the 2nd half and then left the game. The 2nd head of the 2 headed RB monster for A-R Jayden Solis also got banged up and missed a significant part of the 2nd half. With those 2 out the Conks took full advantage scoring 2 more times on 2 QB keepers from Church with runs of 56 and 58 yards. In between Henry Igwala ran in a 16 yard touchdown for the Ravens and the final score was 49-27.

Our ESN Players of the game went to Jalin Church for the Conks and Javon Forward for the Ravens. Kentwood is now 1-4 but more importantly 1-1 in NPSL play while the Ravens drop to 3-2 but a big 0-2 in league play. Kentwood travels to Enumclaw next week and Auburn-Riverside hosts Tahoma.

Peninsula 28, Timberline 27 Game story by Jon Manley in the Olympian