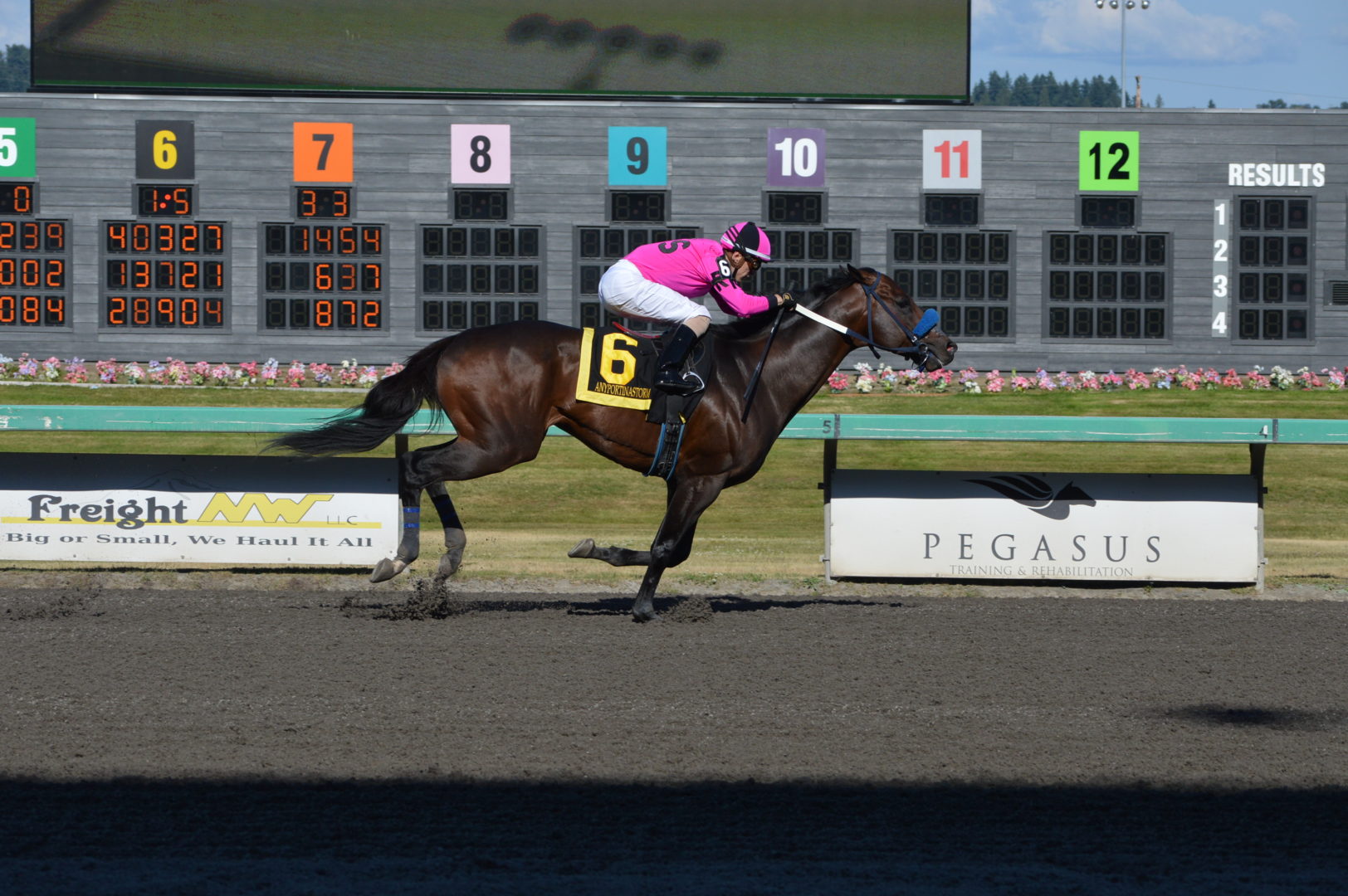 (Auburn, WA) The road to the Longacres Mile is not as long this year and for those thinking about taking a shot at the early favorite better figure out how to put some early pressure on AnyPortinaStorm otherwise stretching out or they will all be watching ‘Storm roll to an easy win.

‘Storm cruised to a 3 and half length win in the first race of the Mile series covering the 6-furlong Governor’s Stakes in a time of 1:07.2. The 1-5 lock ran like one beating his stablemate “Oh Marvelous Me” and longshot “Grinder Sparksaglo”.

‘Storm led every step of the way in the Governor’s and looked to repeat that performance with just an extra 1/2 furlong to cover. When the gates swung open in the Bud AnyPortinaStorm went straight to the lead as expected but what wasn’t  expected is for ‘Storm to get away with a pedestrian :22.3 for the 1st quarter basically turning the race into a 5 and half furlong sprint.

This actually forced Oh Marvelous Me to be closer than usual to his stablemate and then they stopped the clock at 44.4 for the half the race was essentially over. Regular rider Juan Hernandez, up from Golden Gate flicked the reigns at the quarter pole and ‘Storm extended his lead from a 3 length lead to win going away by 6 and half lengths in a stunning time of 1:14.1.

Oh Marvelous Me ran a big race as well to hold on for 2nd once again completing the Blaine Wright barn exacta. In the Governor’s that $1 exacta returned $4.40 this time it dropped to $3.60. AnyPortinaStorm returned the exact pay-offs in the Governor’s and the Bud of $2.40 for the win and $2.10 for both place and show.

Up next in the series is the Mile and Sixteenth Mt Rainier Stakes on July 21. Wright says don’t expect to see his top sprinter in that race just 3 weeks from now. Wright says they have their eye on the Mile and he doesn’t believe stretching ‘Storm out to the 1 and 1/16 and then turn around and run the Mile 3 weeks later makes sense. He says they will train him up and prepare him for the flat Mile on August 11th.

AnyPortinaStorm is owned by Peter Redekop from Vancouver BC and was bred in Florida by Sally Andersen. ‘Storm is by City Zip and out of La Defense who is by Wild Again.

Sunday was also another Family Day in the Pasrk featuring free activities and bounce houses. The track also ran their first ever kids race, a full field dashed a 1/16th of a mile and ranged from toddlers to 17-years-old. This was not an official race but a chance to let the kids actually run and walk on the track. All participants then got their picture taken in the Winner’s Circle and each got an ice cream sandwich for participating.

Don’t forget the family fun resumes on Wednesday, July 3rd for the annual Fireworks show. There is a special post time of 5pm and the Fireworks are set to go at about 10pm. The track Promotions Director Gary Dougherty says the fun begins for early birds with several feature films being played on the big screen in the infield starting at 11am. The movie line-up starts off with Ralph Breaks the Internet, followed by Spiderman-Into the Spider Verse and wraps up with How to Train Your Dragon 3. There will also be live music in the Park with the Retro’s following live racing up until the Fireworks show. Racing will not occur on July 4th and then racing will resume on Friday at their regular time. A reminder that Saturday racing is now at night beginning with a 5pm Post Time.