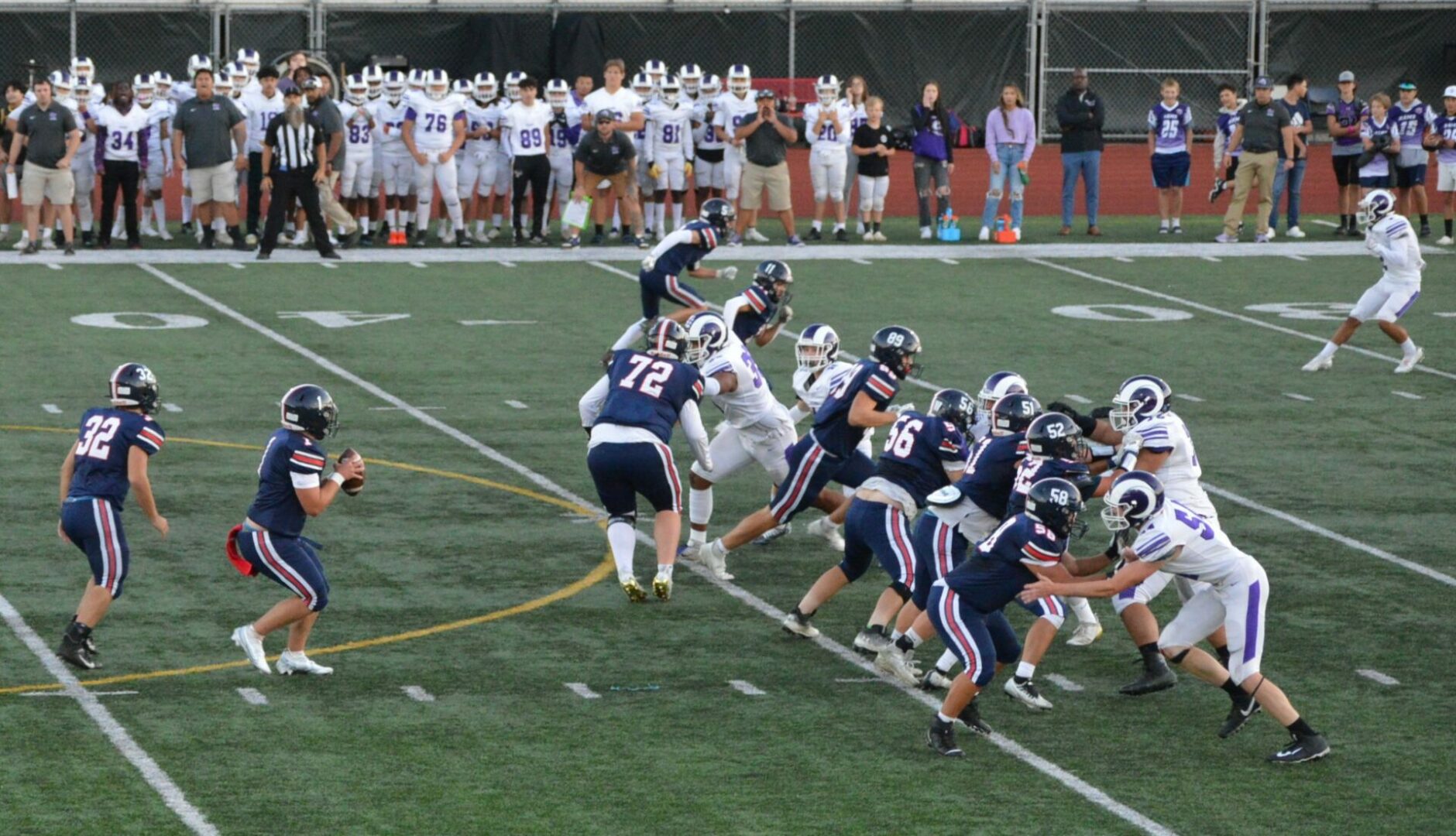 (Lacey, WA) It was the 2nd game of a South Sound Stadium double header with the Capital at North Thurston girls soccer game going 1st and this was the nightcap the Rams hosting Black Hills. Both teams are coming off of seasons they would surely like to forget each with just 1 win in 2021. Both teams accomplished that in week 1 with wins and both were looking forward to doubling that total in week 2.

It was a perfect night for football with warm temps and no wind and North Thurston won the coin toss and deferred so of course Black Hills wanted the ball. The Rams may have now wished to have taken the ball after the kick. Adrian Almonte booted it to the 18 yard where Bronson Campbell took the ball and exploded straight up the field as a massive hole opened up. The speedy Campbell did not waste his chance and sprinted past all 11 Rams and into the endzone untouched for the 6-0 lead. Tanner Parkinson would then kick the PAT and it was 7-0 just 13 seconds into the game. 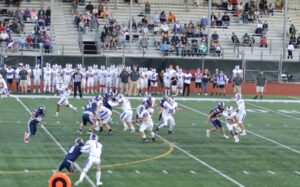 The North Thurston Rams then came right back with their best drive starting on their own 33 after a false start., On 3rd and 7 Adrian Tapia broke one to the left and nearly answered with a 50 yard run down to about the 10. However, the Wolves defense rose up and held forcing North Thurston to attempt a 33 yard field goal by Almonte that drifted a little wide left and the score remained 7-0.

The two defenses then dominated the half until a turnover by North Thurston on the Wolves 47 yard line. The North Thurston coaches were not pleased with the call because they believed it was a short forward shuttle pass and it should have been an incomplete pass. The officials ruled it was a fumble and there was no changing of their minds so Black Hills took over near midfield.

The Wolves then made the Rams pay for it with a running attack 2-10-7 and 5 yards to push the ball to the Rams 29. QB Jaxsen Beck then rolled to his right and floated a perfect strike to Braiden Bond at about the 10 and Bond scooted into the endzone for the 2nd touchdown of the night. The Wolves then went for 2 points and scored to take a 15-0 lead. 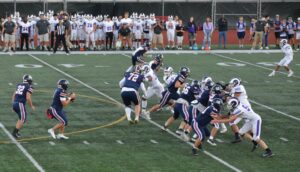 That’s where the score would stay not only until halftime but for the rest of the game as neither team could light up the board again. Both defenses played terrific with several turnovers for each squad. For the Wolves Tanner Parkinson led the way with a pair of interceptions. He also ran the ball and did all the kicking including a tremendous job in snagging a high snap on a punt that would have easily gone out of the back of the end zone. For his efforts he earned our Thorbeckes MVP award.

Other notable performances for Black Hills included Gavin Gordon and Keagan Rongen both with brilliant work on defense, Rongen with a pair of batted down passes. Travis Carson got a pick and Jack Ellison and the front line of Hank Spray, Bradden Larue and Alex Miles-Bensching limited the running attack of North Thurston. Offensively for the Wolves Johnnie Stallings was the work horse with 24 carries for 92 yards. Jaxsen Beck threw for an even 100 yards and had a touchdown and Stallings had 42 receiving yards while Bond had the one 29 yard TD catch.

North Thurston’s defense played stellar and kept the Rams in the game. The offense struggled with Rudy Larsen going 4 of 20 for just 26 yards but to be fair several receivers had chances to make catches and they just fell short. The Rams offense was further dinged when Tapia who ran the 50-yard run was injured in the 1st half and did not return. The Rams also lost other players to injury and not sure if Coach Stippich was just being conservative knowing this was a non-league game or if there were more serious injuries. But it looked like everyone walked off under their own power so we hope Coach just was playing it safe kept them out and hope they are good to return next week when their league schedule begins.

The Rams Ray Parker ended up with the bulk of the work on offense with 20 carries for 64 yards he also completed a pass that was good for about 20 but only got credit for 4 yards after an illegal block downfield. Defensively for North Thurston Sean Bures was a stand-out along with VJ Ioane, Nic Spence and Julian Lee who had several tackles for loss.

Black Hills is now 2-0 on the year for 2nd year head coach Garrett Baldwin and North Thurston drops to 1-1. The Wolves will travel to Rochester next Friday to open EVCO 2A league and Rams are home next Thursday against Capital to open SSC conference play.

Adrian Tapia with a 50 yard scamper