(Lacey, WA) The Timberline Blazers coming off there first win of the season over Eastmont hosted the River Ridge Hawks in a stadium they both call home. River Ridge comes in extra fresh after their game last week against Lakes was canceled due to air quality concerns and were looking to even their record to 1-1.

Both teams would come out a little flat punting on the first 3 possessions of the game. The Blazers 2nd drive looked promising but ended with the Hawks Kyler Hunkin picking off a pass near the goal line. River Ridge would go 3 and out and give the ball back to the Blazers.

Timberline would score 4 plays later on a 31 yard touchdown pass from Jacob Nadeau to Jerrell Larkins with 38 seconds to play in the first quarter. Just like the first quarter the 2nd would start with a punt by both teams. The Hawks would then go on a 9 play drive with running back Jonothan Mapu leading the way but it was Keoni Aguon taking a quick handoff from 3 yards out for the touchdown the PAT was no good making it 7-6 with 5:40 to play in the half.

Timberline got their 2nd touchdown pass from Nadeau this time to Jackson Brown right before the end of the half they added the extra point and headed to the locker room with a 14-7 lead. Nadeau would end the half 8 of 12 passing for 147 yds and 2 tds with Jerrell Larkins his favorite target with 5 catches for 121 yards. Jonothan Mapu lead the Hawks with 15 carries for 84 yards.

Timberline would punt on their first drive after 4 plays but River Ridge would break the pattern going on a 10 play drive ending in a Mapu 10-yard touchdown run. They would go for 2 but got stopped at the 1-yard line making it 14-12 Blazers. It would take only one play for the Hawks to get the ball back after Ian Williams recovered a fumble, the Blazers 2nd turnover of the game. 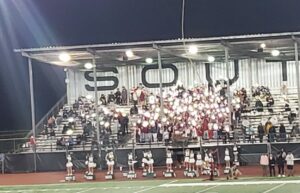 Both teams would punt for the final time on the next possession each. River Ridge would end the 3rd quarter building momentum and driving down the field. The Hawks would start the 4th with a 3rd and 4 from the Blazers 31 after a big stop by the defense the Hawks would go for it on 4th down and get stopped but a personal foul facemask would keep their drive going and 4 plays later River Ridge took the lead with Mapu running in his second touchdown of the game leading 18-14. Trying to push the lead to 6 they would go for 2 and again get turned away by Timberline.

With 10 minutes to play the Blazers would answer with a 12 play drive of their own. Nadeau found Larkins for a 34 yard pass early in the drive and Darell Gipson for 27 yards on 4th down to keep the drive going. 3 plays and an offensive holding call later and it is 4th and 21 from the Hawks 22 yard line. Jacob Nadeau called his own number and uses all of his listed 5’10” 165 lbs to break tackles and bulldoze his way into the endzone . The extra point was added with 5:14 to play Timberline was up 21-18.

Both teams would turn the ball over on downs on their next drives and Vonte Walker would seal the win for Timberline with an interception of Hawks QB Darian Harper. Timberline would line up in victory formation and move to 2-1 on the season. They will take on Central Kitsap in their next SSC contest. River Ridge falls to 0-2 and will face Yelm next week.

You can watch the entire match on the NFHS Network on-demand. Subscriptions are $11.99 per month and gives you access to the entire NFHS Network all across the country to watch the live broadcasts or any on-demand games. Literally hundreds of thousands of hours of game content. Go to https://www.nfhsnetwork.com/affiliates/eli-sports-network

Timberline strikes with a 31-yard TD toss Nadeau to Larkins

Mapu pulls the Hawks within 2

Nadeau clinches it for the Blazers