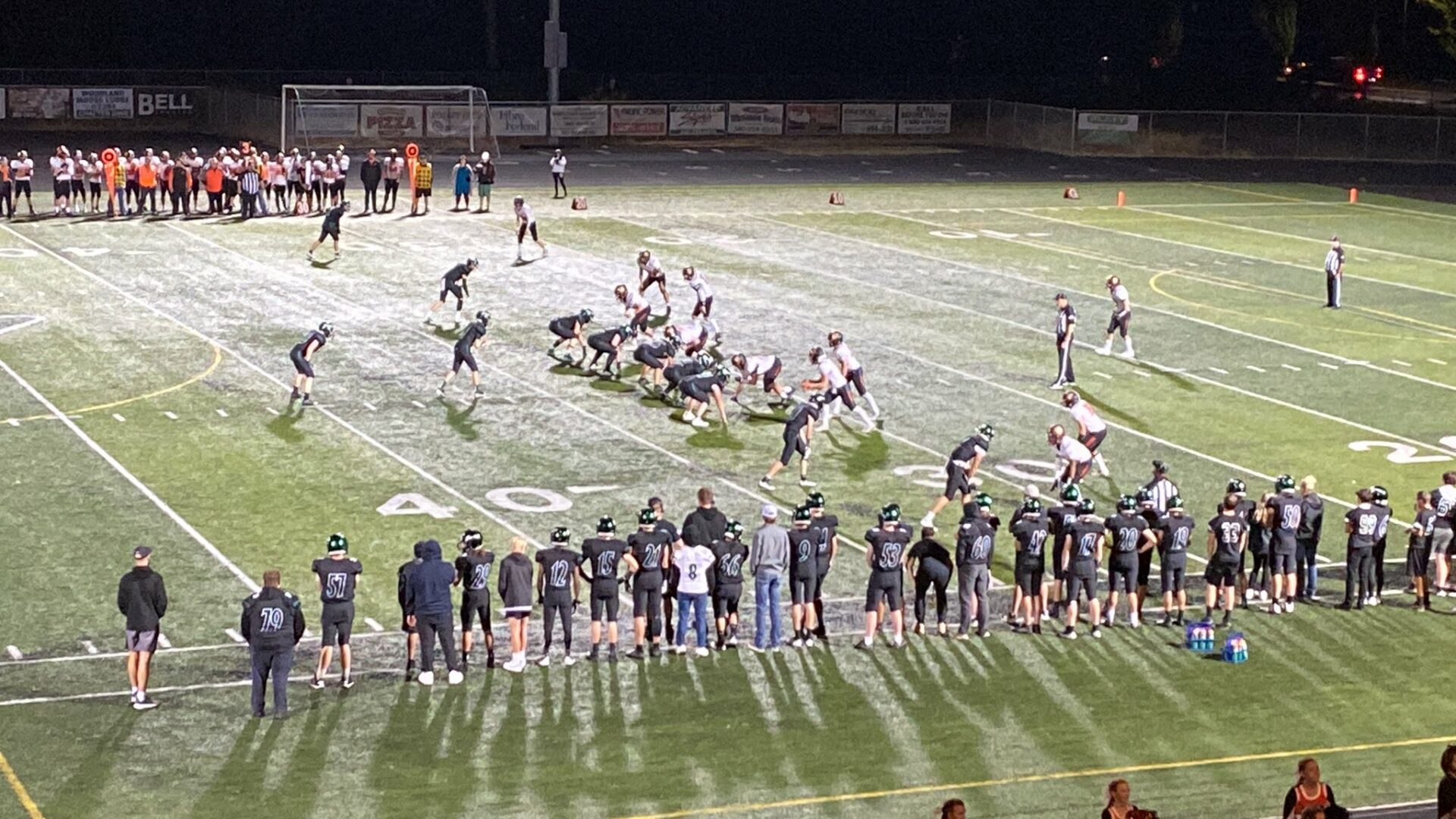 A half-century after Woodland won their only state title in football, the Beavers are looking to march their way to another state title, lead by first year head coach Sean McDonald who won three state titles at the helm of Kalama. The Washougal Panthers are looking to make it back to the state tournament for the first time since 2019 and win their first state title in football, lead by head coach David Hajek, who is in the middle of his third stint as head coach of the Panthers. There was pregame rain that drenched both teams during warmups but the rain cleared out by kickoff. The Washougal Panthers and Woodland Beavers came into the night 1-1 as both teams were looking to get league play started on the right foot at Beaver Stadium in Woodland, WA.

Washougal had the ball first as the Woodland defense set the tone early forcing a three and out. The Beavers on their first possession committed their first mistake of the night. Woodland had a bad snap that went over the head of punter and set the Panthers up at the 2-yard line for their second drive of the night. The Panthers star QB Holden Bea called his own number and ran in the first score of the night to give the Panthers a 7-0 lead.

Woodland’s offense lead by their southpaw, junior QB Brett Martynowicz was able to generate some good drives offensively but turnovers would haunt the Beavers all night. Washougal’s defensive line was able to put lots of pressure on Martynowicz all night which threw off the passing game for Woodland. Sophomore RB, Elijah Anderson had a very good game running the ball as he made his presence known, showing the rest of the GSHL that he will be a star player for the next three years.

Best friends Holden Bea and WR Sam Evers connected on a 45-yard touchdown pass to make the game 13-0. Sam Evers was able to beat the defense on a post route that saw him get past his defender and he was able to easily stride into the end zone. After the Beavers weren’t able to answer Washougal’s two touchdowns, the Panthers turned to another offensive weapon, RB Liam Atkin. On the first play of the drive, Atkin took a handoff from Bea and barreled his way through the Beavers defense, refusing to go down on a 56-yard touchdown run which is the longest offensive play for the Panthers this season. Washougal turned to Atkin on the two point conversion as Atkin took the option pitch from Bea and was able to find pay dirt and extend the Panther lead to 21-0.

Woodland with their backs against the wall had another decent drive going but four first half turnovers kept giving the Panthers the ball back. With under one minute to go in the second quarter, the Panthers scored their third touchdown of the second stanza with Atkin running it in from 16 yards out making it 27-0.

Woodland, lead by state champion head coach Sean McDonald did not give up. The resilient Beavers defense intercepted the Panthers as DB Sam Burns took the ball all the way to the 1-yard line, almost scoring on a pick six. Washougal’s formidable defensive line was able to keep the Beavers out of the end zone and force the Beavers to turn the ball over on downs. Woodland would come up with their first points of the night as the Panthers fumbled the ball in their own end zone and falling on it for a safety, making the game 34-2 in the third quarter.

Last year, Bea and Evers connected for three touchdowns against the Beavers and this year was the same story, as they hooked up for a 19-yard touchdown that Evers caught and muscled his way through the defense to make it 41-2 in the third quarter.

Despite star running back Eli Anderson being shaken up after a 24-yard screen pass, the Beavers were able to continue their drive down the field in the fourth quarter and get on the board as Landon Utter caught a 9-yard touchdown pass from Martynowicz to give the Beavers some positive momentum moving forward, making the game 41-9.

Both teams put their backups in to get some experience for the younger players and the game would end 41-9 with Washougal moving to 2-1 on the season while Woodland dropped to 1-2. The Panthers won their third straight game against the Beavers, putting up 41 points for the second consecutive year.