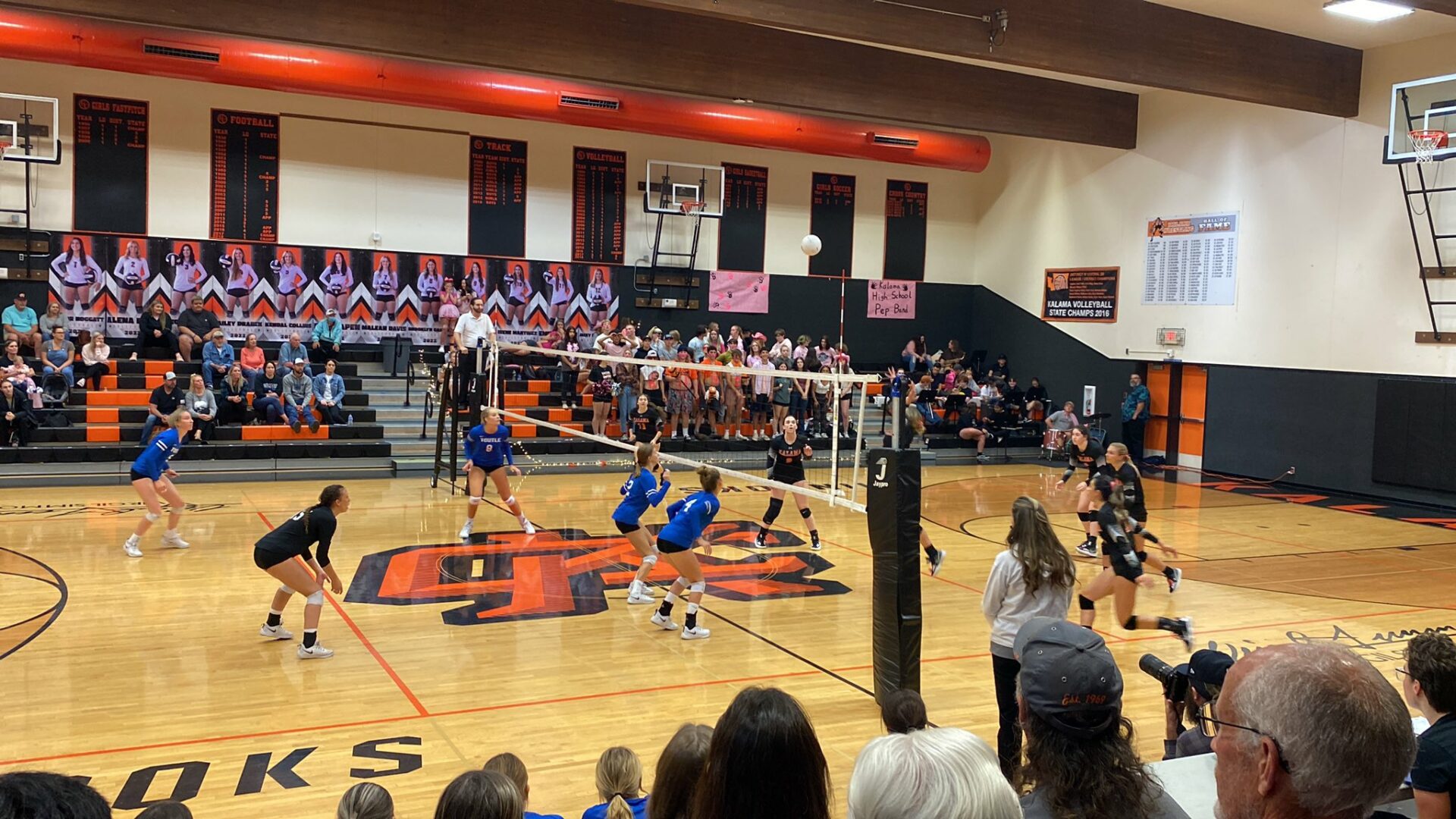 (Kalama, WA) Toutle Lake battled Kalama on Thursday for the top spot in the Central 2B volleyball standings. Kalama came in as the last undefeated in the 2B classification but Toutle Lake matched them in league play with an undefeated record against league foes. The Ducks would be just the second team to take a set from the Chinooks in league play, but a fast start by Kalama would be the key for the Chinooks as they were able to pull out a hard-fought matchup three sets to one.

In the opening set, Kalama stormed out to a big early lead. Rhegan O’Neil served five consecutive points for Kalama to pull them ahead 6-0 in the blink of an eye. Taylor Hoggatt added six more points to make it 14-3 and with exceptional play at the net by Kendal Collins, Emily Capen, and Alena Ross, the Chinooks just overwhelmed Toutle Lake. Grace Hadaller got off to a strong start for the Ducks with three kills for the first three points for her squad. However, the big early deficit was too much to overcome as Kalama ran away with the opening set 25-9.

The second set was back and forth early but Toutle Lake would take a 7-3 lead thanks to Hadaller and Layni Brandhorst. Lainey Dean and Kendal Dean were really solid on the backline for the Ducks but then Kalama got rolling. Taylor Hoggatt served six straight points and the Chinooks setter Rhegan O’Neil did a really great job of setting for all of her teammates to keep Toutle Lake off balance. Collins and Ross took over at the net with Ella Capen joining in with some blocks at the net. Six more points including an ace were served by Kendal Collins to help Kalama build a 20-11 lead. The Chinooks would stay strong and put away the second set 25-15.

With Kalama searching for another sweep, the Toutle Lake squad completely turned things around. Ileigh Lynn caught fire for Toutle Lake to give them their own three headed monster with Lynn, Hadaller and Brandhorst. Brandhorst served three straight points while Kendal Dean served two. A fantastic rally was won by the Ducks and that felt like the turning point. Building a 15-5 lead, Toutle Lake was able to prevent any big runs by Kalama with great communication and error free volleyball to roll to a 25-17 win to avoid the sweep.

The 4th set was intensity from the first serve on. Both teams had three straight points early to even the score at 4-4. It looked like Kalama would pull away when Kendal Collins served three straight points to make it 15-11 Chinooks. However, Toutle Lake answered with three straight served by Ileigh Lynn including a big kill by Grace Hadaller to even things at 17-17. Rhegan O’Neil went back to serve and Irene Martinez took over the match at the net. The senior started nailing every kill opportunity she had and that gave Kalama the momentum that they needed. The depth of Kalama was too much for Toutle Lake and the Chinooks finished off the set 25-20 to give them the win 3-1.

Our MVP of the match was Rhegan O’Neil who had a whopping 40 assists in the match for the Chinooks. She kept the Ducks on their toes as she never favored one teammate over another and spread things out constantly. O’Neil also mixed in some pass overs and got a few to drop for points in the win. Kendal Collins would lead Kalama with 15 kills and 17 digs. Irene Martinez added 14 kills. For Toutle Lake, Grace Hadaller led the way with 14 kills with Brandhorst adding five and Ileigh Lynn had three with four aces.