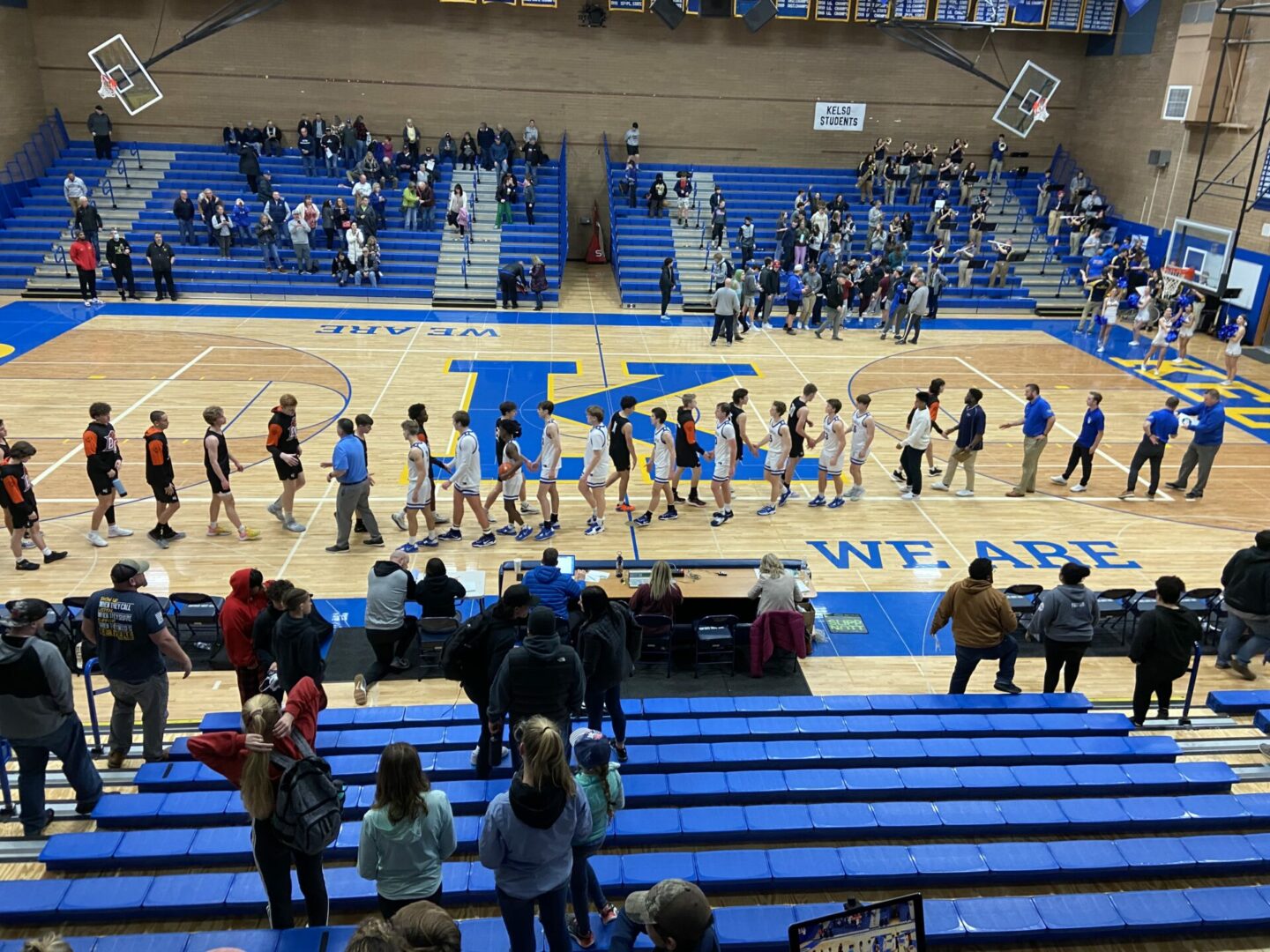 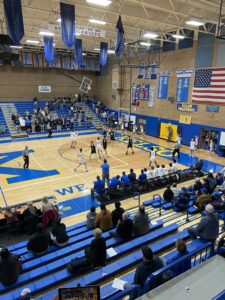 From the opening tip, there was great elan shown by both teams as the expeditious pace created plenty of opportunities for both offenses. Kelso held a quick 4-2 lead but after Battle Ground’s Trey Spencer buried a straightaway triple, the Tigers would go on a 15-4 run to hold a 17-8 lead in the first quarter. With their backs against the wall early in the ballgame, the Hilanders responded nicely with a 9-2 run to close the quarter with the help of two transition lay-ups by Easton Marshall and a deep three from Hayden Yore. Battle Ground took a 19-17 lead after the first quarter in a very tight contest.

In the second quarter, Battle Ground held the lead for the first part of the quarter doing it both from the field and the free throw line. The Tigers were a perfect 5-5 from the charity stripe in the first half but Kelso came roaring back. For a moment, with the score at 25-24, Kelso had the lead but that was swiftly answered by two Tait Spencer jump shots and a Henri Smith lay-up that put the Tigers up 30-25. The Hilanders were 12-15 from the free-throw line and put the Tigers in foul trouble later in the quarter which helped Kelso outscore Battle Ground 20-8 in the final four minutes of the second period. Ethan Mitchell hit a late three-ball to give Kelso an astounding 28-point quarter and a 45-39 lead at halftime. There was some discrepancy as to what the score was but the official scorekeepers decided that Battle Ground’s Ian Ebinger had his feet behind the three-point line which was originally ruled a two-point basket on the floor.

After the halftime break, both teams continued their offensive prowess as Kelso held the lead for the entire third quarter. Battle Ground tied the game a couple of times but never held the lead in the third as both teams traded baskets as the quarter went on. Tait Spencer kept up his marvelous play as he was the majority of Battle Ground’s offense all night while Kelso was spreading the ball around nicely to hold a 64-62 lead heading into the fourth quarter. Easton Marshall erupted in the fourth with 11 points but the Spencer twins carried the Tigers offensively. But, with the game tied at 68, Trey fouled out after Kelso drew a charge on him in transition, and he finished the game with 11 points. Kelso would remain in control of the lead as both offenses again would trade baskets down the stretch of the game. Kelso was up 80-75 with just under a minute to go but Tait Spencer hit a three and tied the game at 80 with a fast-break lay-up. Marshall hit two critical free throws to put the Hilanders back in the lead at 82-80, and after a timeout, Battle Ground quickly went into the front court, a jump ball was called and the possession arrow was in favor of the Tigers with only 16.6 seconds left in regulation. Tait Spencer received the inbounds pass and went to the basket and banked in a close shot to tie the game at 82 and force overtime, despite Battle Ground outscoring Kelso in three of four quarters.

In the extra period, Michael Henderson hit a three, and Blake Eastham seconds later stole a Tigers pass and raced to the basket to give Kelso an 88-84 lead. Noah Currie nailed a three and hit two free throws to give Battle Ground an 89-88 lead but once again Kelso responded with an Eastham basket to give the Hilanders a one-point lead. After an unsuccessful trip down the floor for Battle Ground Hayden Yore made his way back to the free-throw line and hit both free throws to extend to 92-89 with exactly 19 seconds left in overtime. Tait Spencer once again was Battle Ground’s savior as he grabbed a nearly stolen pass in the front court, turned, fired, and delivered an enormous three to tie the game at 92. Michael Henderson took the inbounds for Kelso and motored into the land but saw his floater bounce off of the rim as time expired to send the game to a sixth period.

In double overtime, Easton Marshall made two free throws, then moments later drew a charge on Tait Spencer which resulted in Spencer fouling out of the game. He finished with a game-high 37 points but had to sit for the remainder of the game and hope that his Tigers teammates could collect the road victory. Battle Ground couldn’t overcome the foul trouble as five Tigers fouled out of the game while only Hayden Yore for Kelso fouled out. Yore finished the game with 20 points and had a spectacular display from the free throw line, going 13-14 from the line and making his final nine free throws. Kelso was able to outlast Battle Ground in the double overtime thriller, taking a 104-94 victory on their home floor.

Battle Ground drops to 11-5 as they look to turn things around on Friday when they host Prairie. They beat Prairie in the first matchup between the two squads in December, 78-49. The Tigers sit one game behind Camas in the race for the top spot in the 4A GSHL. Battle Ground lost to Camas on the 5th, 86-79 in the first meeting and they play each other again in the final game of the regular season on February 7th in Battle Ground.

You can watch the entire game on the NFHS Network on-demand. Subscriptions are $11.99 per month and gives you access to the entire NFHS Network all across the country to watch the live broadcasts or any on-demand games. Go to https://www.nfhsnetwork.com/affiliates/eli-sports-network to sign-up if you don’t have a subscription or to find the on-demand replay of this game.